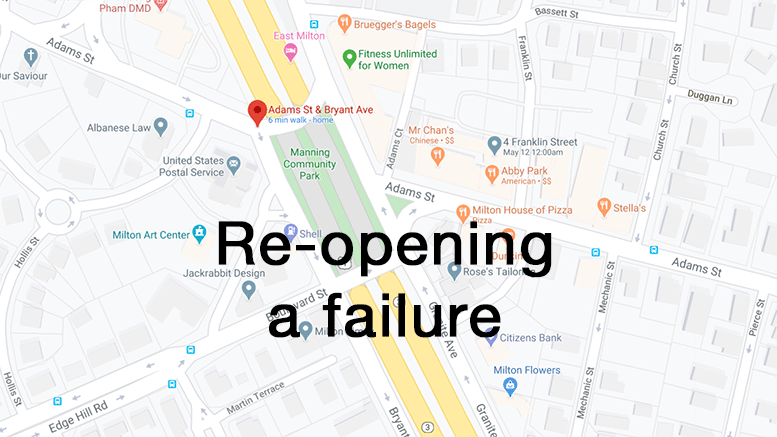 After a two week trial re-opening of the westbound overpass on Adams street, state transportation officials have deemed the effort a failure and have decided to again close the thoroughfare. Citing greatly reduced traffic numbers and usage over the past two weeks, DOT has determined that the supposed volume demands cited by many residents simply did not play out.

Project chief Max Gridloch stated “comparing the daily traffic numbers cited by many in town as justifying the re-opening against our vehicle count over the past two weeks, we simply do not see the numbers playing out in a way to justify the convenience of the westbound access on Adams street. As such, we have again closed the overpass so that people may can go back to enjoying the decrepit state of the park and ingest the exhaust fumes in one of the most dangerous areas for pedestrians in the Town of Milton.”

In a related matter, prospective East Milton developers also concluded their traffic study over the last two weeks and have determined that a building up to seventeen stories on one third of an acre would have no impact whatsoever on what their study found to be the extremely light traffic in the area.