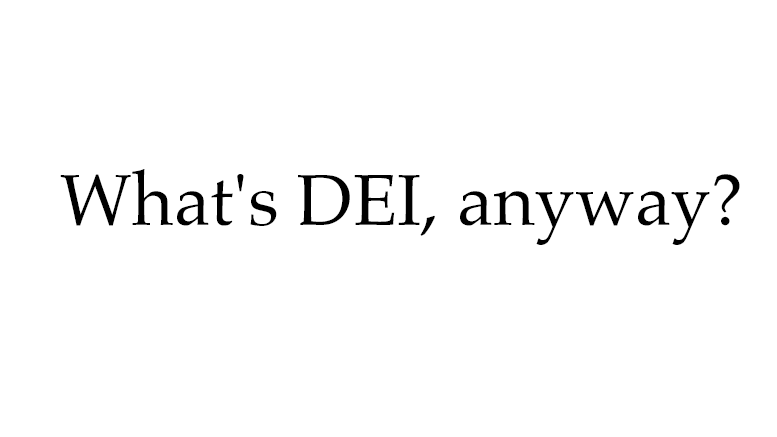 Acronyms can be confusing, and sometimes they can make you feel dumb if you’re not “in the know.”

So, in order to not feel dumb, I did some digging into better understanding DEI.

DEI stands for “Diversity, Equity, and Inclusion” in a given setting – such as work, a church, a school, etc.

What does DEI in schools mean, practically speaking?

I’ve been trying to understand why it’s causing such a ruckus. (Right now, DEI in school settings is being vilified in a lot of conservative circles.)

So I’ve done some research and here’s what I have boiled it down to:

Are you having a party for the town where everyone is invited? What food are you serving? What music are you playing (country? rap? punk? salsa? something else I’m not cool enough to consider?) Does everyone feel comfortable at the party or do some people feel left out and awkward? (Nobody wants to feel awkward!)

Remember how math equations used names like  “Sally and Billy.” Well, not all people in America can relate to those names. So, let’s include names that better represent the melting pot that is this country.

What type of books are being read in class? Are they only about a certain type of family? Are 80% of them about people with white skin in straight family settings? Maybe this represents your reality, but it’s not everybody’s reality.

DEI means bringing other voices to the table. Not just white voices. Not just what has historically been “the norm.”

It’s making sure all kids feel connected to the material because they can see themselves in it. This has historically been a given for white people, and it’s time for us to share.

When you relate to material, you learn.

And ALL kids deserve to be able to both relate and learn.

Considering all of the above, though, I still couldn’t figure out what the problem was with any of this, until a friend spelled it out for me.

When it comes to education, most (white) people really aren’t worried about including other voices, and other family types, and names that aren’t “Bobby and Susan.”

Worry #1: Their kids’ education being watered down because “those people aren’t as smart as we are.”

They’re worried (probably secretly) that their kids’ education will suffer because the core, ugly, unadmittable belief is that black kids aren’t as smart as white kids.

And that’s painful as hell.

Is that the root of your worry, too?

It’s a hard question, I know, and it’s much easier to avoid it than it is to do some difficult soul-searching.

Worry #2: My kid may be indoctrinated to be gay or transgender.

C’mon everyone. You can’t teach a kid to be something they’re not.

Wouldn’t parenting be so much easier if we could? I’d love it if one of my kids that was an avid laundry folder.

Really, what I see DEI is – is anti-racism and anti-discrimination.

And if you are truly anti-racist and anti-discrimination, DEI will never be a threat to you or your kids.

Many Milton residents are confused about where some candidates stand with respect to DEI in the Milton community. So, in thinking about who you are voting for this election season, you might want to ask some tough and pointed questions, not only of the candidates, but of yourself: What have you done to further your knowledge about diversity and/or to foster diversity? And if you don’t care to do so, why not?

You can see all election-related information and currently submitted candidacy announcements here: www.miltonscene.com/tag/election-2022

Are you a candidate? Submit your free announcement here.

The Town-wide candidates with links below have submitted candidacy announcements:

Trustee of the Cemetery:

Are you a candidate? Submit your free announcement here.

Be the first to comment on "What’s DEI, anyway?"