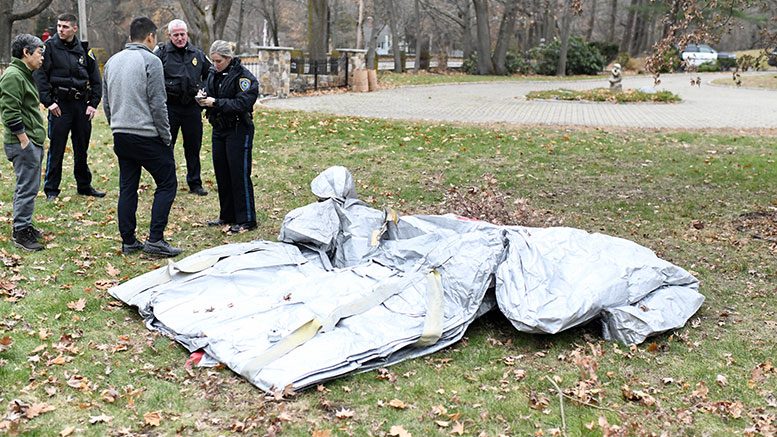 Huang, who lives on Adams Street, was taking a break from raking leaves to talk with Stephanie Leguia while his toddler ate lunch inside.

“It sounded like a high speed train rushing by followed by a huge thump. It looked like an enormous tarp.” – Stephanie Leguia

Leguia said the two neighbors had their backs to the massive falling object and jumped to turn around when it happened: “Wenhan said, ‘Where did that come from?’ And I thought, ‘How are we going to get that in the trash?'” 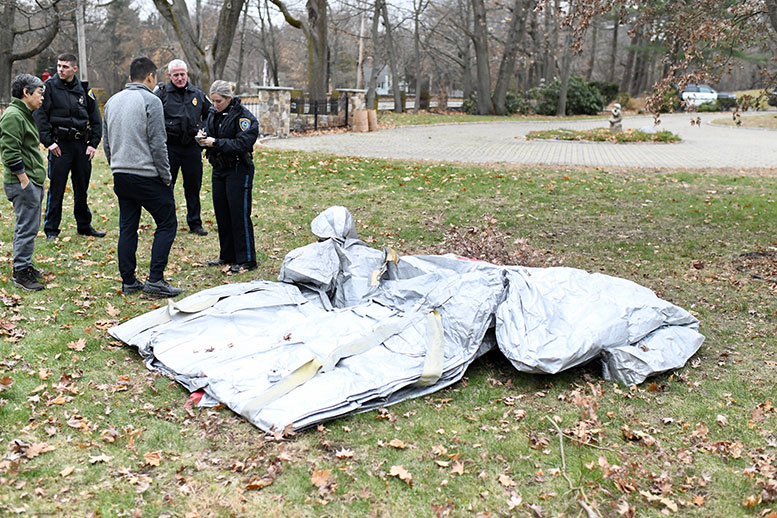 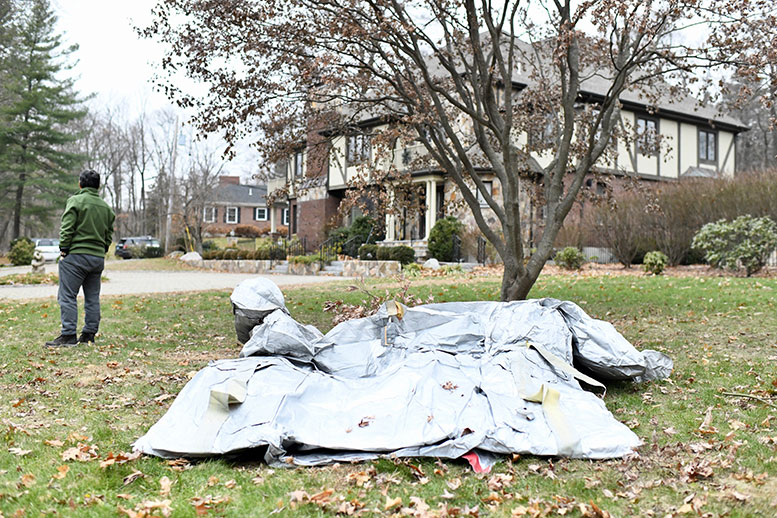 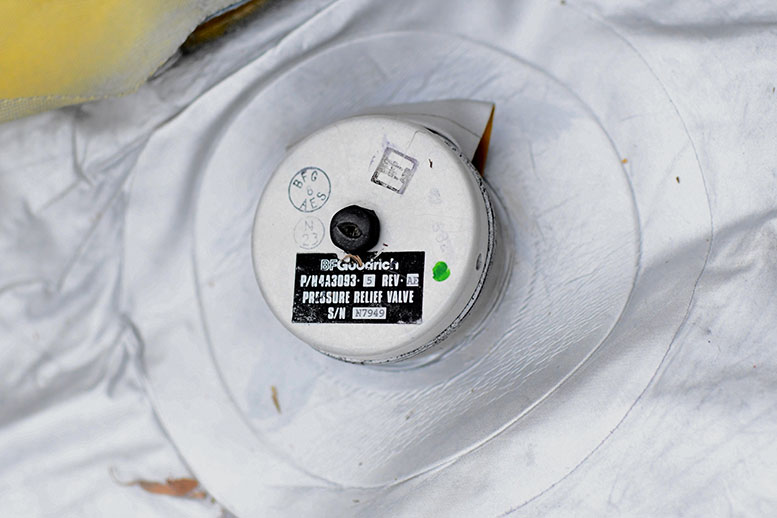 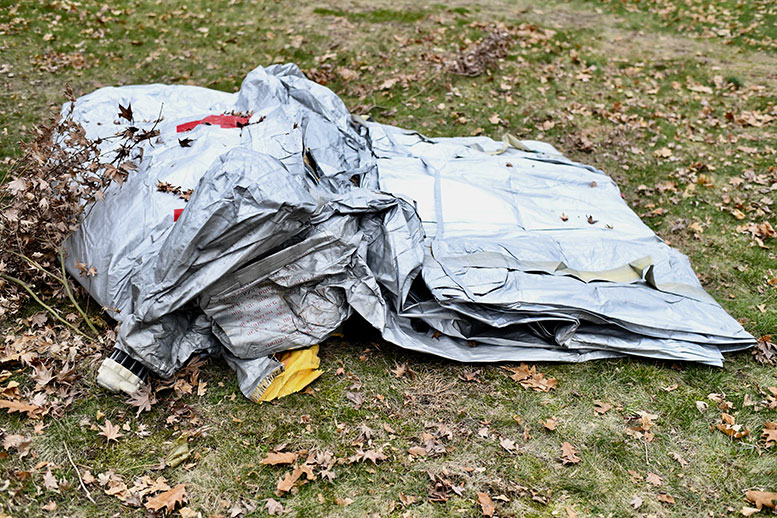 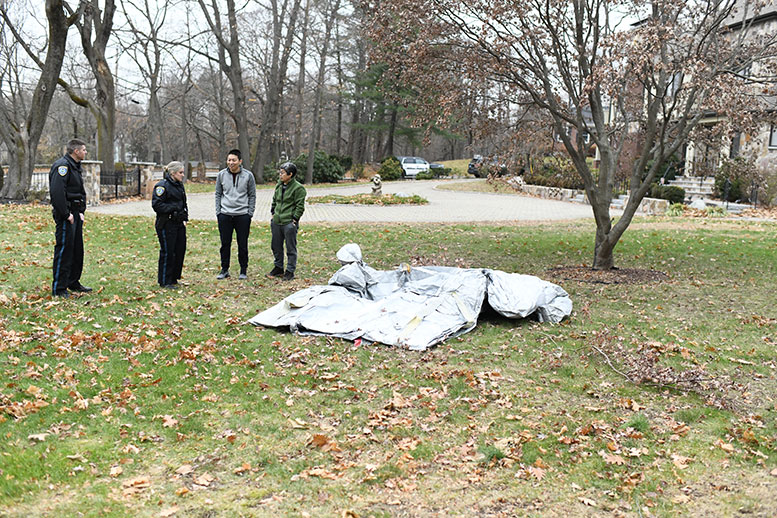 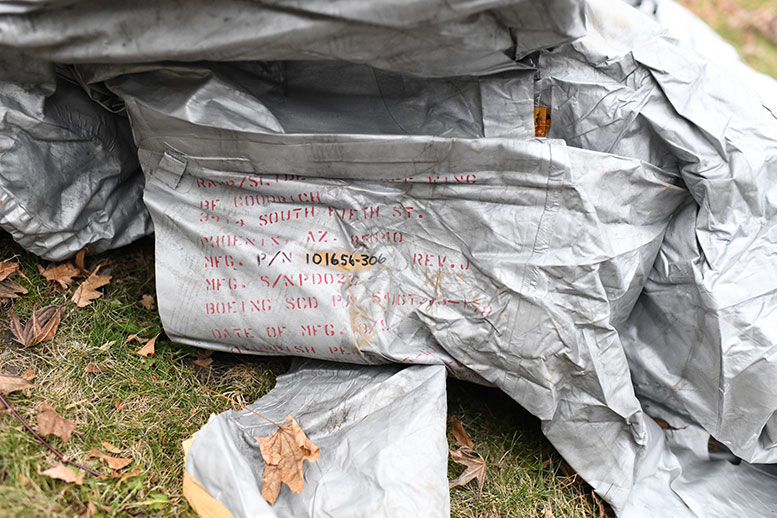 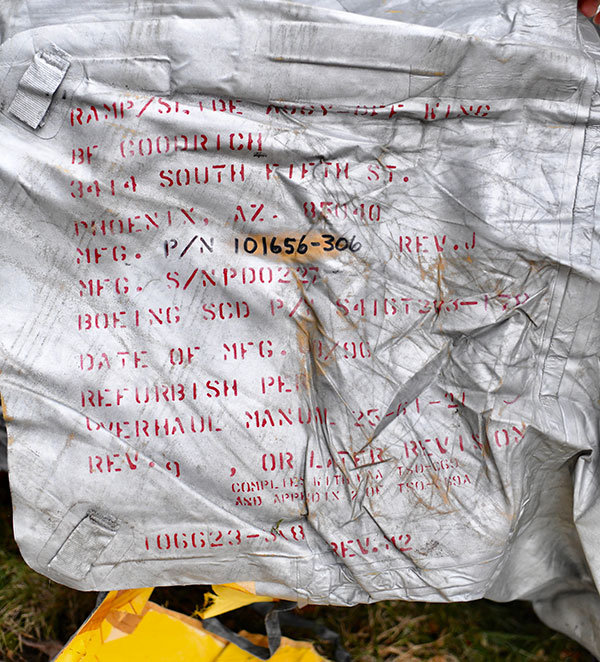 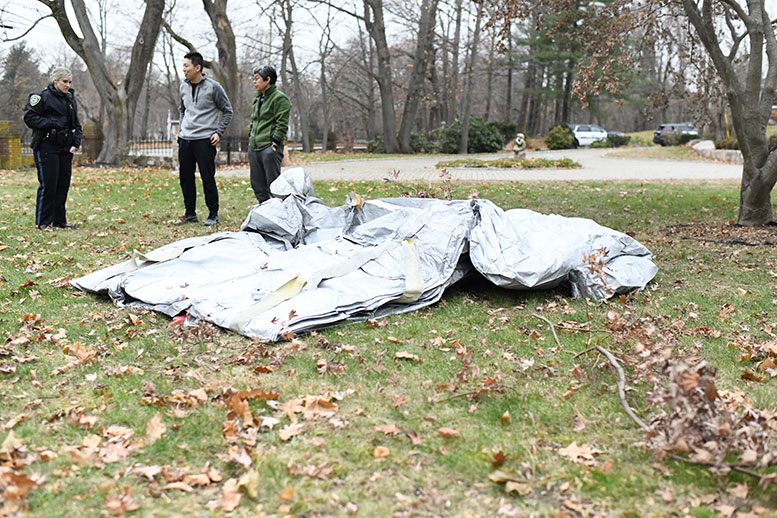 According to Leguia, at first sight, the slide looked as though it was something that had blown off of a truck, but it was much too far from the road for that to have happened.

It didn’t take the two neighbors long to figure out the slide belonged to a plane when they saw the word “Boeing” printed on the side of what looked like a massive silver tarp. They would later find out that the escape slide was from a Boeing 767, which has a known flaw of the slides falling off mid-air.

“When we tried to pull it open it was sort of sealed and it was heavy. We saw what was the canister filled with [nitrous oxide] gas to inflate it and BOEING stamped on the side. We thought that it must be a slide and raft.” – Stephanie Leguia

Both residents live under Logan’s satellite-based flight path, which, in 2018, concentrated nearly 65,000 flights over the same residents in Milton. At Huang’s and Leguia’s location, planes are often 1500 feet or lower. Leguia points out that her back deck is constantly covered in jet fuel soot.

State Rep. Bill Driscoll expressed relief that no one was hurt, yet also shares the concerns of neighbors over the dangerous malfunction, emblematic of Milton’s ongoing inequitable share of airplane traffic:

“While this is a very large and visible reminder of the plane flight paths over Milton, the daily noise and particulate pollution emitted remains a major concern. This was a near miss and thankfully no one was hurt, but we must continue to talk about the direct assault we get from parallel runways with closely sequenced planes. The daily consequences of lost sleep and long term health effects due to the FAA failing to disperse planes over a larger area is the less tangible and greatest concern. I remain committed to working with all levels of government on these issues. The FAA must ensure those flying and those under the planes are safe in the near term and long term. They have work to do.”

Select Board chair Mike Zullas expressed similar gratitude that no one was injured and criticized the FAA’s failure to address and remedy the dangers of the falling of large, potentially explosive objects out of low-flying planes, in addition to Milton bearing the burden of the majority of Logan’s inbound plane traffic:

“For several years, the FAA and the airlines have been been inequitably torturing many of our neighborhoods with incessant, deafening noise and raining down huge amounts of hazardous pollutants on our Town. To that we add the danger of huge items falling on our community. The FAA’s failure to address and remedy these injustices must end now. The FAA and the federal government need to be accountable to the residents of Milton, and to help, not continue to harm, us. We will do everything in our power to force the FAA to answer to Milton and to remedy the continued harm and danger to our residents.”

“Incidents like this one are extremely rare and we are thankful that no one was injured,”Jennifer Mehigan, a spokesperson told the Boston Herald in a statement. “Delta, in conjunction with the FAA, will be doing a full investigation into what happened.”

This is not the first time an evacuation slide has plummeted from this type of plane.

In March of 2016, a slide from the same type of 767 landed in a front yard in Mesa, Arizona. Prior to that, in December of 2015, the FAA proposed a fix to more than 300 of Boeing’s 767s after “multiple reports of uncommanded escape slide inflation.” The agency gave airlines four years to make the fixes.

Peter Dunn, chairman of the local non-profit, Fair Skies Nation, which is dedicated to working on noise and air pollution issues arising from aircraft operations, commented that “by statute, the FAA’s dual mission is air safety and promoting the airline industry. The four year period for the slide retrofit was much too long for an industry making record profits. Like the Boeing 737 Max, the FAA’s relationship with the airline industry is far too cozy.  It is well past time that some Congressionally-mandated professional distance be implemented and concern for the health and safety of the people overflown be added to the FAA’s mission statement.”

Seems that the airlines are running out of time.

Relay For Life of Braintree-Milton-Randolph this Saturday