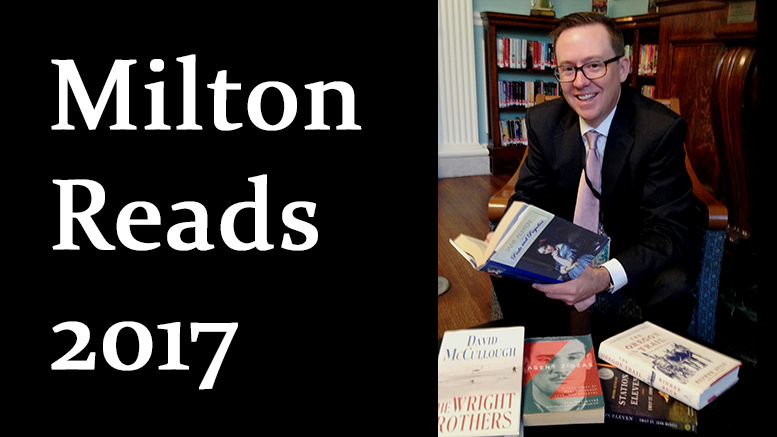 Library Director Will Adamczyk says, “I love them all!”

After reviewing dozens of titles nominated by the public, the Milton Public Library is pleased to announce its finalists for “Milton Reads 2017: One Book; One Town.”  The public is invited to vote in person at the library or online at www.miltonlibrary.org.

Now in its sixth year, the town-wide reading initiative invites Milton residents to participate in a shared cultural activity by exploring the same book together as a community.

Throughout March 2017, Milton Reads will include a range of free programs for adults and families sponsored by the Friends of the Milton Library.

“Over the summer, we read, read, read,” explains Frank Schroth, the chair of the Library Board of Trustees, who founded the program. “We narrowed the list down to five books, on which the public can now vote.”

The public is invited to vote in person at the library or online at www.miltonlibrary.org.

And the nominees are:

Discover one of the most popular novels of all time. Jane Austen’s classic novel of the 18th c. tells the story of Mr. and Mrs. Bennet’s five unmarried daughters after two gentlemen have moved into their neighborhood: the rich and eligible Mr. Bingley, and his status-conscious friend, Mr. Darcy. You can finally read the book you’ve been wanting to read for years!

Experience the journey of a lifetime. In this true story, Rinker Buck chronicles his epic modern-day journey traveling the 2,000-mile length of the Oregon Trail. He does it the old-fashioned way – in a covered wagon with a team of mules – and it’s a journey of discovery. When you finish the book, long car rides will seem like a luxury!

Glimpse into a version of the future without losing sight of the past. An apocalyptic flu pandemic kills most of the world population. The survivors – a Hollywood star, his would-be savior, a nomadic group of actors and musicians – roam among scattered outposts and devastation surviving for art and humanity in this story of hope by Emily St. John Mandel. No, there are no zombies in this book!

Gain unique insight into the world of a reknown double agent in this tale of spy vs. spy by Ben Macintyre. One December night in 1942, a Nazi parachutist landed in a Cambridgeshire, England, field. His mission: to sabotage the British war effort. But he would shortly become MI5’s Agent ZigZag. Multitasking has never looked more glamorous than in this exciting true story!

Take flight with this story of innovation and determination. Drawing on the immense riches of the Wright Papers, popular historian David McCullough tells the dramatic story-behind-the-story about the brothers who taught the world how to fly—Wilbur and Orville Wright. You’ll never fly in coach the same way again!