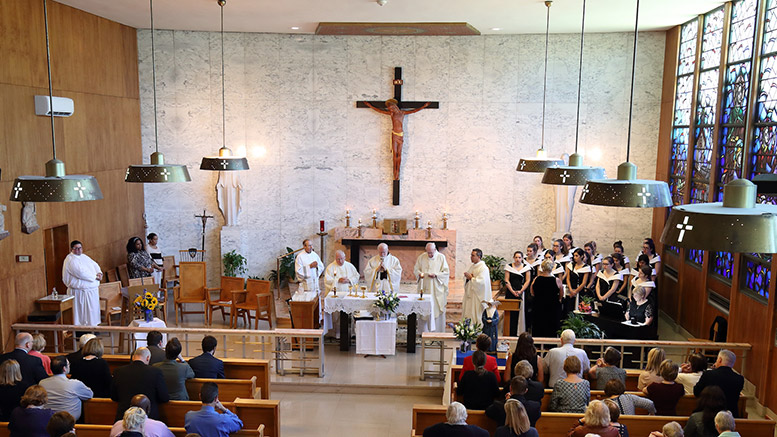 Cardinal Seán O’Malley joined Labouré College in celebrating Mass on Friday, September 29 to commemorate the college’s 125th anniversary. Founded in 1892, Labouré is the longest provider of nurses in the Boston area.  “Labouré is not like other colleges in the region. We are totally devoted to healthcare, and the majority of our graduates stay within the region, working at hospitals and other institutions within Massachusetts,” said interim president Dr. Lea Johnson.

The Mass was held at the Convent Chapel of the Sisters of St. Joseph of Boston, located on the campus of Fontbonne Academy adjacent to Labouré College, and attended by faculty, staff, students, alumni, and the community. During the reception, Dr. Johnson announced a new Labouré scholarship in the Cardinal’s name and Leo Thibault, the College’s Mission Coordinator and Academic Advisor, shared images of the new stained glass being installed on the campus later this year, sponsored by generous alumni donations.

While the College celebrates a historic 125 years of nursing and healthcare education, they’re not done yet. Dr. Johnson encouraged attendees both to remember the roots of Labouré’s Catholic tradition, and to carry that tradition on to future generations: “A Labouré education is about devoting one’s life to service – in this case, it is service to others within the scope of the healing professions.”

Town of Milton to undertake a water meter replacement project