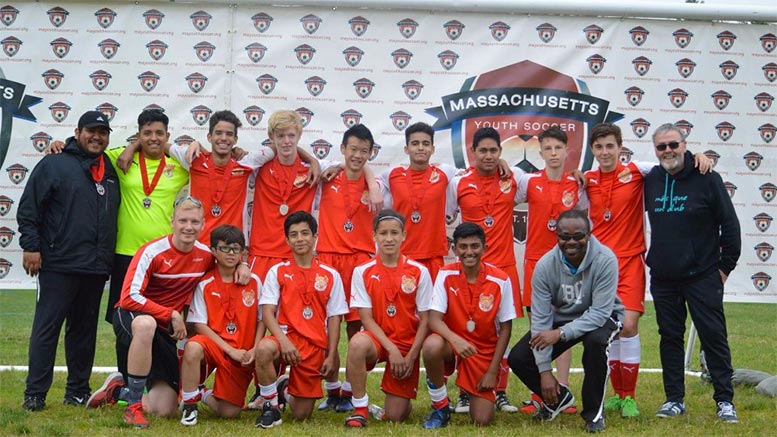 You may have seen Catherine King’s recent posts on Milton Neighbors. Here, she describes her reason for raising money for the FC Blazers soccer program.

What motivated us, as parents to initiate this fundraiser was that after years of being involved in club soccer and having conversations with parents, players and other club officials, we realized that FC Blazers carry more than their fair share of players who display financial need.

This year’s team has been accepted to participate in ESPN’s Wide World Of Sport Showcasing tournament in Orlando in December. This tournament is rated #1 in the country and attracts hundreds of college coaches, not just from from prestigious US colleges but also from overseas, providing an opportunity for our players to get recruited and help them get to the next level of play; often something that is outside of their reach financially.

Some of this team’s members find themselves unable to travel to Orlando for this tournament because of their family’s financial situation. Which is why we decided to set up a fund to try to raise enough money to bring 5 of our players to Orlando.

Here is the link to contribute: www.gofundme.com/blazers-boys-tournament

We are reaching out to our family and friends as well as our broader community to ask you to contribute to this fund. No matter where you live you can contribute $10, $50 or whatever you can afford. Nothing is too small. We are often sad that, due to being an ocean apart, our immediate families cannot attend Oscar’s matches and get to know these dedicated and committed boys who are his teammates so we are hoping that this gives you the opportunity to be a part of something that is important to our family.

Some people have asked why it costs so much and why a club can’t pay for travel costs: We fundraise annually to cover the financial aid packages that we offer to families who qualify, but for a tournament like this at the height of travel season, it is not possible for a club to pay travel expenses for individual players. And, unlike other clubs, FC Blazers never offer a “free ride” to “good” players who might help win games. Our financial aid is completely merit-based and is not offered as an option until players are accepted onto a team.

At FC Blazers, 61%​ ​of​ ​our ​athletes​ ​come​ ​from​ ​disadvantaged backgrounds. ​​​Over​ ​the​ ​past​ ​ten​ ​years, under the leadership of founder Francis Okaroh,​ ​FC Blazers has​ ​helped​ ​players​ ​prepare for​​ ​opportunities​ ​in​ ​higher​ ​education​ ​institutions​ ​that​ ​would not​ ​have​ ​been​ ​financially​ ​feasible​ without​ ​soccer​ ​scholarships. Often these players live in neighborhoods or come from family situations where being of a specific race or culture places teens at risk. Giving them the opportunity to escape what might be a difficult or challenging family situation or environment twice or three times a week can literally be life-changing for them. ​ For a lot of our players, soccer is their language. It’s an intrinsic part of who they are and how they communicate with each other and when the door to success is opened in one common language, other doors follow.

The goal at FC Blazers is to develop confident players who can compete at the highest level possible both in New England and beyond. There is no “end of season” for them. There are no “additional fees” tagged on if a team makes it out of state. Just fundraising! The expectation is that all of the Blazer’s teams make it to the post season. If they don’t, they go back to work for next year. Pre-season training starts early. For the younger age groups, training starts in late August and for the high school players, training starts as soon as the rules allow-usually in early November.

We saw the “Blazers Difference” at the first training sessions and since then one of my favorite things to do is watch the jaw dropping that happens when parents observe a training session for the first time. The level of professionalism that is present for players that are still at a very early stage of development is, in our opinion better than the self-described Academy or Elite teams.

This fundraiser is part of a larger club-wide fundraiser that FC Blazer have currently running. FC​ ​Blazers​ ​Soccer Club is​ ​a​ ​501(c)(3)​ ​non-profit​ ​sports​ ​education​ ​and​ ​training organization​. Having a non-profit status means the club can accept donations with the assumption that those donations will be used to support players who otherwise would not be able to afford the club fees.

Last day to register for Milton Soccer for Fall 2015 is July 10!