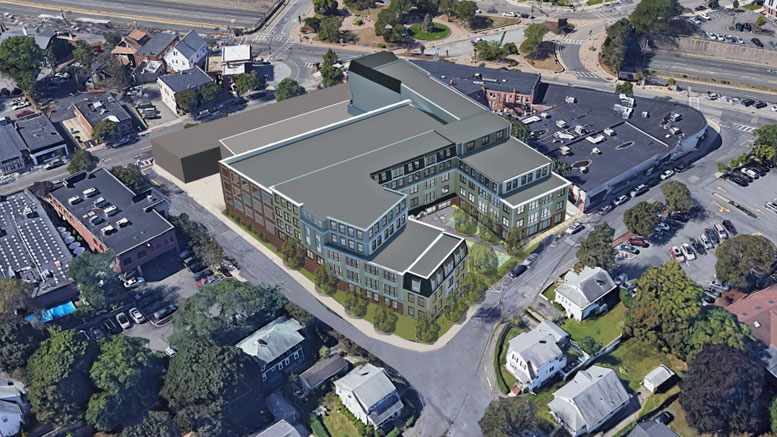 Milton’s Board of Selectmen and Planning Board held a joint meeting last week to hear from Falconi Companies about the latest iteration of their East Milton property development and to hear details about the 40R Smart Growth program should an overlay district be put into place for East Milton. 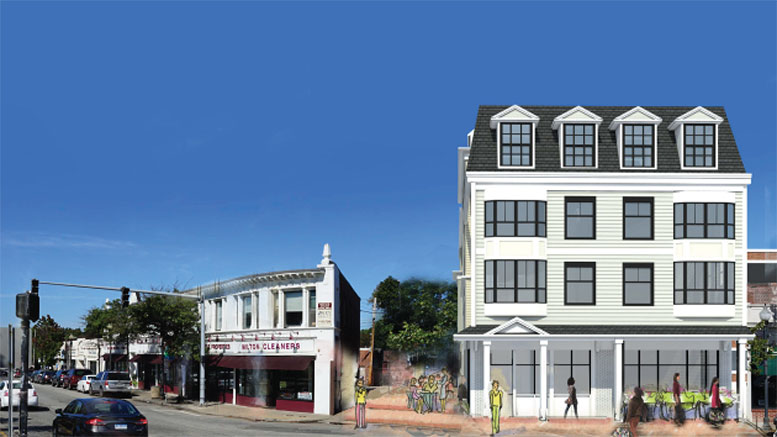 The joint meeting opened with a presentation on the 40R Smart Growth & Starter Home Zoning Program by Bill Reyelt & Elaine Wijnja of the Massachusetts Housing and Community Development (DHCD). The presentation provided details on the advantages an overlay district might offer East Milton. The 40R Smart growth program sets up zoning rules in advance of development projects, eliminating the need for spot zoning and project-by-project approvals, such as the proposed Falconi development. 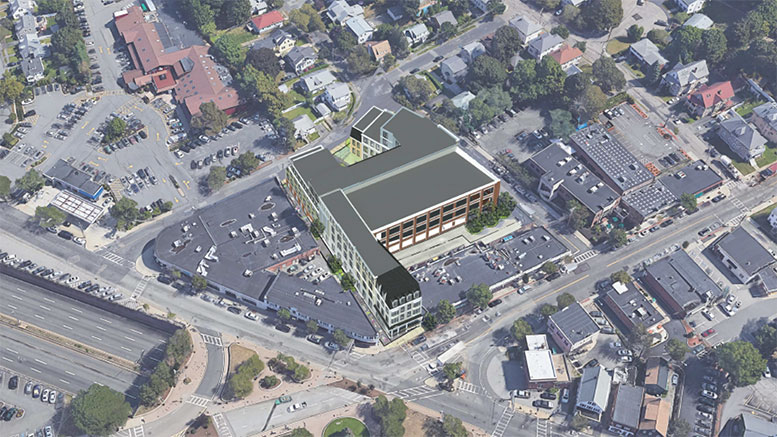 In eligible locations, densities on multi-family units are capped at 20 units per acre with a 20% affordable housing requirement. Multi-family units can be as small as 15 or as large as 1,000 and a community can have multiple 40R zones. The state provides $10K – $600K via zoning incentive payments, based on district size. There are currently 45 40R districts around the state, including Belmont, Easton, Plymouth, Norwood, and Lynnfield. The approval process for the 40R Smart Growth program takes six months to a year. 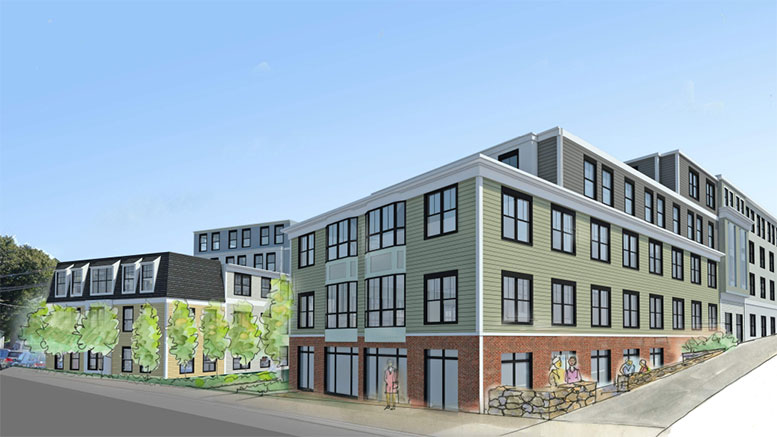 Representatives from Falconi companies then presented their new development proposal. The new proposal increased the number units from its previous iteration from 50 to 64. Total commercial square footage would be 14,021 square feet, including the square footage from existing Falconi office properties at 4 Franklin Street, which would be demolished in order to accommodate the new, expansive development.

Parking would be via a five level above-ground garage in the center of the development. There would be no underground parking. Though representatives for Falconi Properties touted the new project as potentially offering additional parking available to the public, including parking on the fifth floor open rooftop, they would not guarantee there would be no fee for the parking. When Planning Board member Brian Furze questioned Falconi’s representative, Ned Corcoran as to whether the parking would be free, Corcoran responded: “We’re working on that.” Attorney Corcoran also indicated that Falconi and its representatives “don’t think we are adding an additional amount of traffic with this development” to East Milton Square’s substantial pre-existing traffic issues. 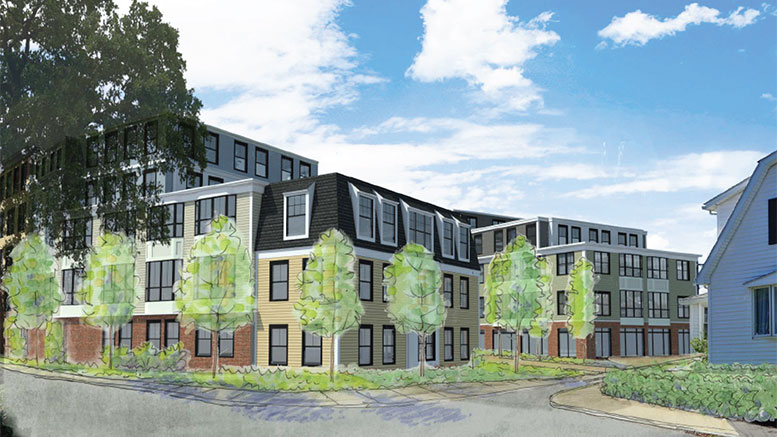 The five-story proposed development, if implemented, would permanently and drastically change the face, body, and environment of East Milton Square. When Board of Selectmen member Mike Zullas asked if the East Milton Neighborhood Association would be consulted further as to the plan for the project, Corcoran was non-committal: “We will let the Board lead the process. Our work will be with the Town boards going forward.”

EMNA member Jerry Touger, who worked on the neighborhood committee, expressed his confusion over how the new plan was a compromise with the neighborhood: “Previously this was a project consisting of 50 units. Our major concern was the number of units then, plus four story structures. The Falconis say they have paid attention to the concerns of the community. We see the same overall height and an increase from 50 to 64 units. Touger went on to elaborate: “The position of the EMNA working group was to meet something mutually acceptable. I don’t see that there has been very much motion [from Falconi] in that direction.”

Planning board members April Lamoureux and Denny Swenson both voiced numerous concerns about the East Milton Neighborhood’s input into the compromise:

“You should really consider what we can do to make this the best for the neighborhood,” – April Lamoureux.

EMNA Board member Peter Dunn strongly encouraged the town to adopt a 40R overlay district in East Milton in order to establish standards and expectations in the square on a broader basis: “This should be coordinated with the deck project. We should be thinking about what we want the Square to look like 50 years from now.”

Dunn also expressed his disappointment with the results of nearly a year’s worth of volunteer work on behalf of the neighborhood yielding no consensus on the originally-proposed project.

Mike Zullas added that he would like several members from the East Milton neighborhood on a town committee to work further on the plan.

Board of Selectmen Chair Richard Wells invited the public to attend a July 9th meeting at the Council on Aging, where the Town will present on the proposal for the East Milton Deck. The meeting will be held at 7:00 p.m. View more information on the proposed deck project design.

View the 40R Smart Growth Zoning Program Presentation (PDF): A presentation by Bill Reyelt & Elaine Wijnja of MA Department of Housing and Community Development given at the joint Board of Selectmen/Planning Board meeting on June 21, 2018 regarding 40R “Smart Growth Overlay Districts.”

View the Falconi Mixed-Use Development Proposal (PDF): A presentation given by The Architectural Team and Attorney Corcoran on behalf of the Falconi Companies at the joint Board of Selectmen/Planning Board meeting on June 21, 2018 regarding a preliminary proposal for redevelopment in East Milton Square.

Editor’s note: A previous iteration of this article referred to the garage as having “five stories.” We have changed the language to read “five levels.”