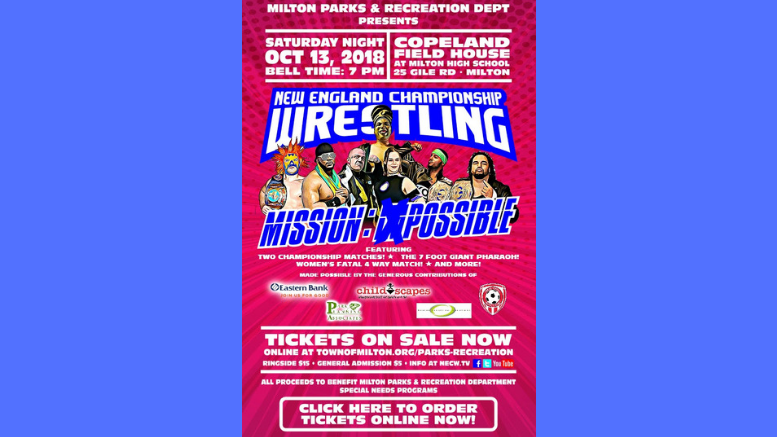 Join us for the first ever in Milton New England Championship Wrestling Event on Saturday, October 13th at 7:00 p.m. at the Copeland Field House, Milton High School. It’s sure to be a great night for the entire family. All proceeds to benefit the Milton Parks and Recreation Special Needs Programs. General Admission seating $5.00 Ringside seats $15.00

Two championship matches top an all star, all action card. In the main event, NECW Heavyweight Champion, Todo Loco faces former two-time champion, Slyck Wagner Brown. Two of the all time best in NECW history will square off in what should be an epic confrontation.

NECW Tag Team Champions, The Kool People defend their titles against on of New England’s top teams, The Maine State Posse, who make their NECW debut on this event.

In a special attraction match, the 7 foot Giant Pharaoh meets the maniacal Jacob.

Impressive up and comer, Kid Curry faces his biggest test in NECW as he takes on New England veteran, Anthony Stone.

Milton Knitting Group to continue to meet throughout March