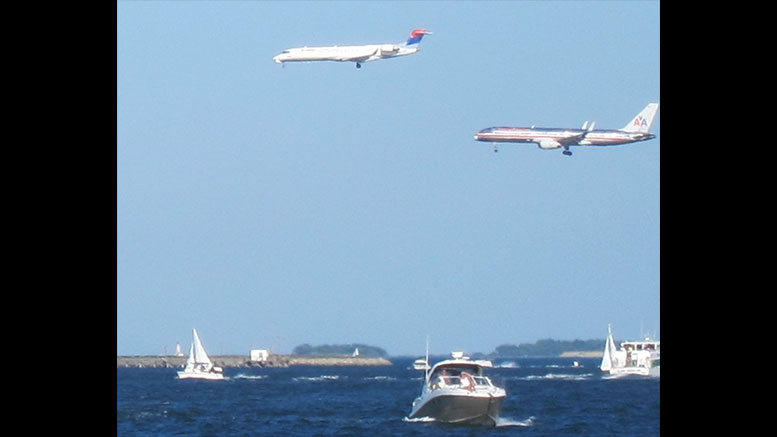 This image shows two planes landing in parallel on runways 4L and 4R, which both fly over Milton. The photo was taken by Professor Alvin Roth, the Gund Professor of Economics and Business Administration Emeritus at Harvard and winner of the 2012 Nobel Prize in Economics.

Following vote of the Select Board, on July 12, at my request, the Town of Milton submitted a set of Requests and Recommendations to the FAA and Massport calling for dispersion of airplane overflights, aircraft adherence to altitude glide slope standards, and field work by FAA consultants that will confirm noise impacts and needed overflight reforms. Our state Representatives Bill Driscoll and Dan Cullinane as well as State Senator Walter Timilty provided letters of support.

The full text of the Requests and Recommendations can be found by clicking here.

In summary, the Requests demonstrate the way that planes arriving on Logan airport runways 4L and 4R follow narrow GPS-based flight paths as they pass over Milton, Dorchester, Mattapan, Hyde Park and South Boston. This is due to the FAA imposition of area navigation (RNAV) precision paths that placed aircraft on a narrow 2 meter-wide corridor in the sky at descending altitudes as they pass over our residents. The Requests reiterate that FAA should restore the dispersion of aircraft along multiple paths in a manner similar to that which existed and were used safely before introduction of the concentrated RNAV GPS-based arrival paths. The Requests provide several ways to amend the current paths, by dispersing flights across areas that previously shared the overflight burden including adjoining municipalities, testing an over-water alternative, and other dispersion alternatives.

The Requests provide several ways to amend the current paths, by dispersing flights across areas that previously shared the overflight burden including adjoining municipalities, testing an over-water alternative, and other dispersion alternatives.

The Requests also seek an FAA and Massport commitment to help assure that aircraft adhere to the FAA’s 3 degree glide slope norm rather than descend in a manner that departs from that, requiring acceleration (and concomitant increased noise) to regain altitude while descending unevenly along the glide slope path. Furthermore, impacts on residents of the west-side of Milton, Dorchester, Mattapan and South Boston need to be included in FAA and Massport’s ongoing consideration of runway 27 and 33L departure altitude and flightpath alternatives.

Field work is requested so that FAA will see that present noise monitors are not optimally positioned to record RNAV path aircraft noise, and so that FAA consultants can see and understand from realities on the ground alternative possibilities for dispersing flight paths and thereby lessening noise impacts on residents burdened under the skyrails.

The FAA and Massport currently have the Requests and Recommendations under advisement.

Massport’s own current operating plans and utilization statistics (through June 30, 2019) have recently been published in its ongoing Bond Offering Information Statement which is available here: www.massport.com/media/3249/maportauth02a-pos.pdf. That document contains Appendices A and C which are very worthwhile reading.

For example, note that Massport proposes to spend more than $1 billion on a “people mover” that would move passengers about Logan airport. It would be helpful if Massport would spend a small fraction of that amount on working to promote FAA tests of dispersed overflight paths and runway use rotation.

It would be helpful if Massport would spend a small fraction of that amount on working to promote FAA tests of dispersed overflight paths and runway use rotation.

On another front: in 2018, I drafted an amendment to the FAA Budget Reauthorization Act that would have required that overflight dispersion be restored, as practicable, on a national basis. That Bill was sponsored in the U.S Congress by Senator Markey, a member of the Senate Transportation Committee and supported by Senator Warren; its text was also introduced and co-sponsored in a related Bill by Maryland Senators Cardin and Van Hollen. Although that proposed amendment did not receive support of the Republican controlled 2018 Senate, the need for such reform remains.

One of my goals is to promote a Congressional revision of the FAA statutory mandate to do just that. Perhaps, the 2020 election will provide an opportunity across the thousands of polling booths surrounding the nation’s airports to support candidates for Congress who endorse that amendment.