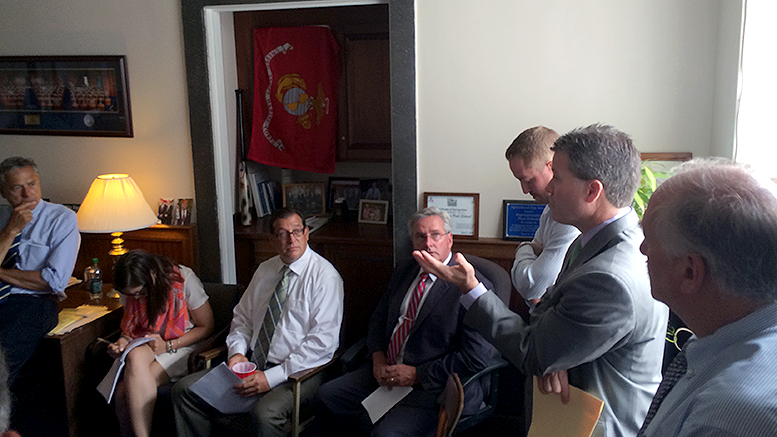 Representative Walter F. Timilty, meeting with the co-chairs of the Joint Committee on Environment, Natural Resources and Agriculture

On Tuesday July 21st, Representative Walter F. Timilty convened a meeting with the co-chairs of the Joint Committee on Environment, Natural Resources and Agriculture to both discuss and advocate for his bill, House Bill 768, “An Act relative to waste removal plans for transfer stations.” The meeting was, also, attended by Representative Bruce J. Ayers, Representative Mark J. Cusack, and some local officials from the region.

Representative Timilty’s bill, if, ultimately, enacted by the Massachusetts State Legislature and signed into law by Governor Baker, will require that any applicant for a proposed waste transfer station shall prepare and submit both an environmental impact report and a waste removal plan. Once submitted, the environmental impact report and waste removal plan must be both reviewed and approved by the secretary of Energy and Environmental Affairs. Unless and until, such legal requirements are complied with, a waste transfer station application cannot be approved.

“The detrimental effects of both noise and air pollution from a waste transfer station are inevitable.”

Timilty filed this bill in in an effort to thwart the implementation of a proposed waste transfer station in the Town of Holbrook. Commenting on the meeting with the co-chairs of the Joint Committee on Environment, Natural Resources and Agriculture, Timilty stated, “The detrimental effects of both noise and air pollution from a waste transfer station are inevitable. Specifically, it is evident beyond any doubt that this proposed municipal waste transfer station will have a deleterious effect on the environment of the region. Therefore, I believe that it is incumbent upon me to do everything possible in an attempt to halt the establishment of this waste transfer station.”