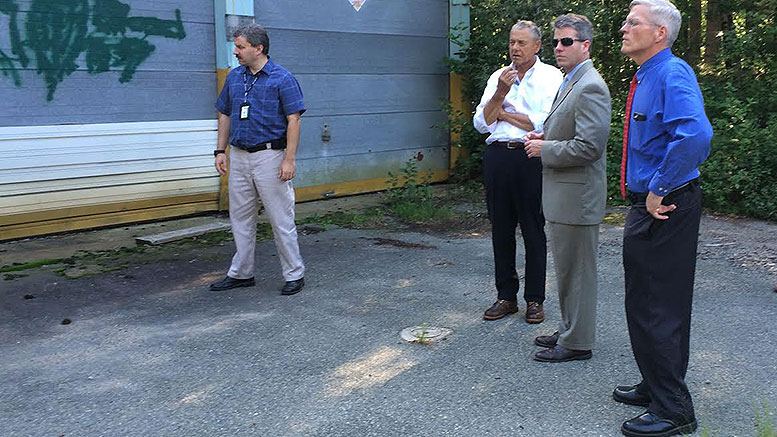 On Wednesday August 12th, Representative Walter F. Timilty arranged for Representative Paul Schmidt, who serves as co-chair of the Joint Committee on Environment, Natural Resources and Agriculture, to attend a tour of the location, proposed for the, ill-advised, waste-transfer station, in the Town of Holbrook.

Timilty orchestrated the site visit in an effort to emphasize the critical importance of his proposed legislation: to be specific, House Bill 768, “An Act relative to waste removal plans for transfer stations” and its’ goal, which is to thwart the establishment of the proposed waste-transfer station in Holbrook. The tour of the proposed site was, also, attended by Town Councilor Bill Alexopoulos, Assistant Town Manager Brian Howard, Town Manager David Murphy, Public Health Director John McVeigh, and Town Attorney Christine Griffin. Furthermore, Representative Bruce J. Ayers, strongly, supports Timilty’s bill.

In the aftermath of the tour, Timilty stated, “It is abundantly clear, to anyone, upon visiting the proposed location of the TLA-Holbrook LLC Municipal Solid Waste-Transfer Station, that the site is environmentally hazardous to the citizenry of the Town of Randolph and all surrounding communities. Moreover, given the decaying and dilapidated infrastructure of, at least, two chemical-producing plants, on, or, adjacent to the proposed-site, it is crucial that Massachusetts General Laws mandate that the applicant for a proposed transfer station shall prepare and submit both an environmental impact report and a waste removal plan. Furthermore, once submitted, the environmental impact report and waste removal plan must be both reviewed and approved by the Secretary of Energy and Environmental Affairs. The bill that I have proposed, House Bill 768, “An Act relative to waste removal plans for transfer stations”, if enacted would ensure that unless and until, such legal requirements are complied with, a waste-transfer station application cannot be approved.”