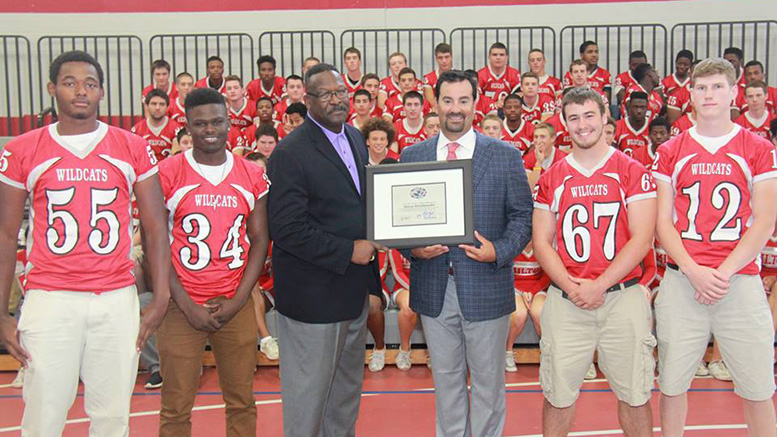 Shared from the New England Patriots.

Milton High School’s Steve Dembowski has been named this week’s New England Patriots
High School Coach of the Week following his team’s 28-7 win over Walpole High School. Pairing an explosive offense with the Wildcats’ signature stingy defense paid dividends for Milton on Friday night. With the help of excellent quarterback play from Mike Fallon, who passed for 241 yards and two touchdowns and added a rushing score, the Wildcats begin their season at 3-0. To recognize this feat, the New England Patriots Charitable Foundation will donate $1,000 to Milton High School’s football program in Dembowski’s name in recognition of his Coach of the Week selection.

Patriots and Pro Football Hall of Fame linebacker Andre Tippett, the team’s executive director of community affairs, visited Coach Dembowski and his team on Tuesday, Sept. 29, at Milton High School. The visit and check presentation will be featured on the team’s weekly television show, “Patriots All Access,” which airs on Friday, Oct. 2 at 7 p.m. on WBZ-TV in Boston and will be available immediately after on Patriots.com.

This is the 20th year in which the Patriots join the National Football League in conducting the High School Coach of the Week program, which recognizes outstanding high school coaches and promotes youth football throughout New England. Tippett oversees the program as part of the New England Patriots Charitable Foundation’s commitment to youth football initiatives.

“In just his first year as head coach of the Wildcats, Dembowski has helped his squad climb to the top of the highly competitive Bay State Conference and begin their season a perfect 3-0. The Patriots are proud to reward Coach Dembowski and his team with a donation to the football program and we wish them luck the rest of the season.”

At the conclusion of the season, one high school coach will be named the New England Patriots High School Coach of the Year and will receive an additional $2,000 contribution toward the school’s football program.

This is the fifth year that Tippett has taken the award on the road to visit the schools that benefit from the
program. This year is also the fifth year the Patriots will accept nominations for High School Coach of the Week.

Anyone who knows a high school football coach in New England who has a great week or reaches a personal career milestone is encouraged to submit a nomination to [email protected].
The New England Patriots Charitable Foundation is the non-profit through which the Patriots support charitable and philanthropic organizations throughout New England. This support comes in the form of direct grants, inkind donations and player appearances. The foundation assists a variety of charitable organizations and programs throughout New England by supporting their educational, family and health initiatives.