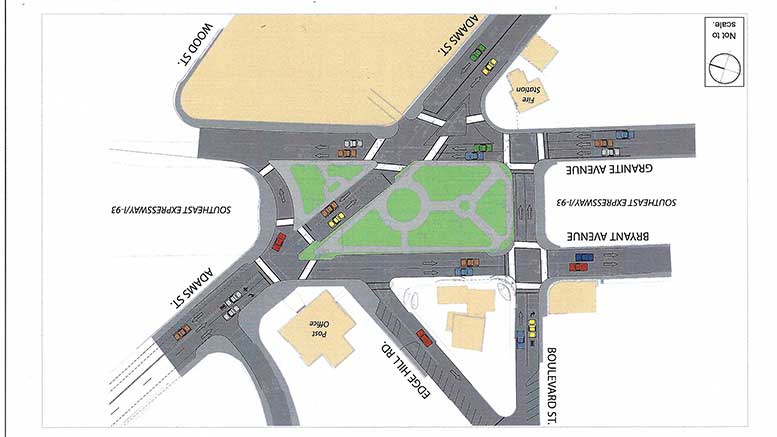 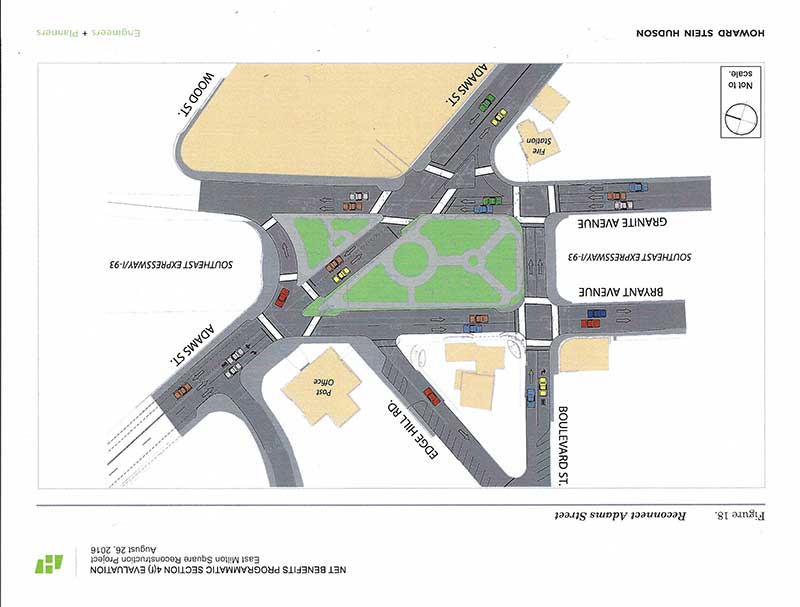 This image shows East Milton’s Adams Street bridge reopened with two-way traffic. It is one element to a study conducted by MassDOT to justify installing a parking lot on the south end of the landscaped deck over the I-93 “canyon”. This option, which they credited as a good solution, was rejected as it failed their goal to remove planters and trees to have parking for the food trucks and a level lawn for a farmers market, concerts and large group events they anticipate. The bridge was closed temporarily five years ago when a large parking lot (55 spaces) was sought inside a roundabout. Perhaps the quest is actually for business parking.

Meanwhile $2 to $3 million dollar earmarks for East Milton Square traffic lights, signage, pedestrian and cyclist safety measures, other off deck parking upgrades, a rehab of the park and other improvements and alterations are held hostage while waiting once again for minimal on deck parking gains of only 14 spaces.

Destroying a nicely treed park for a parking lot may be a mistake. This photo shows the existing park on Bryant Avenue at Boulevard Street. The trees and park planters will be removed for a proposed parking lot. The parking lot will be located between the Shell Station and Fire Station. on the landscaped deck over the I-93 “canyon.”

Five years ago, a previous Board of Selectmen closed the Adams Street bridge to create the roundabout with the intent of creating deck space for parking lots. The current plan will increase parking by 14 spaces and will create a planter (and tree) free space, which the Selectmen reportedly support for food trucks, a farmers market, concerts, and events with large crowds. In 2011 the Selectmen’s consultant’s final report recommended a host of other options to improve E. Milton parking “before turning much of Manning Park into a parking area.”

Because state and federal laws protect such displacement of parks, complicated waivers are required which the Selectmen must have decided is worth the years of delay and shabbiness of the area.