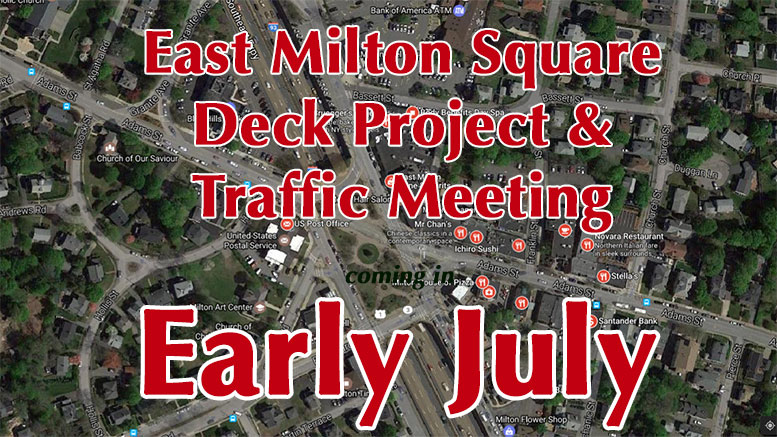 The Board of Selectmen will receive an update on the traffic, parking and pedestrian situation at East Milton Square at their Thursday, June 22, 2017 meeting from traffic engineering firm Howard Stein Hudson and will schedule a public hearing for early July to seek public comment about East Milton Square.

The town still has the ability to utilize up to $2.2 million in federal earmarks for improvements to East Milton Square, but the purpose and needs for those funds need to be shovel ready.

As many of you may know, an earlier plan to add 25 parking spaces to the deck at East Milton Square was rejected by the Federal Highway Administration and The Commonwealth of Massachusetts Secretary of Energy and Environmental Affairs and is no longer an option. Some recent suggestions for improving the situation at the square include changing the operation of the traffic lights from a timed to a demand sequence, and reopening Adams Street to vehicular traffic. Because of sewer and water work planned for this summer on the eastbound side of Adams Street, reopening the street to vehicular traffic may not be practical before the construction work is complete.

To date, the members of the Board of Selectmen and the Town Administrator have met on the East Milton Square situation with Federal Highway Administration and Massachusetts Department of Transportation officials, U.S. Congressman Stephen Lynch, State Senator Walter Timilty, State Rep. William Driscoll, the Milton Chamber of Commerce and other interested parties.

They are seeking your input on East Milton Square at the public hearing they will schedule for early July.

Superintendent Gormey releases updates for the week of September 30th, 2019