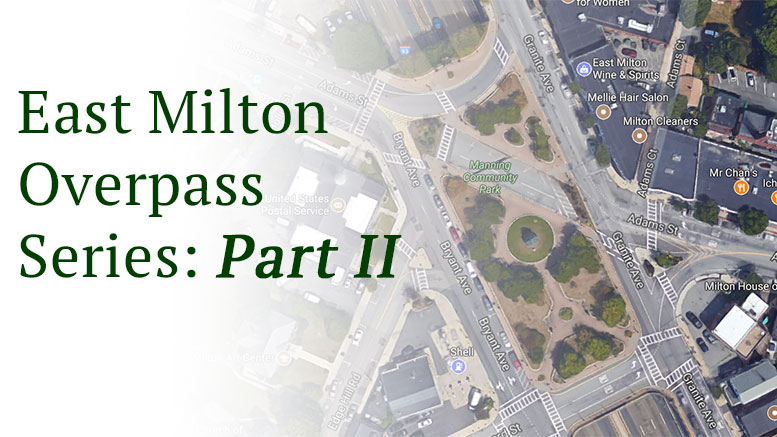 This is part two of a three-part opinion series, contributed by Milton resident, John Cronin.

After seven years and nine different Selectmen, the Town of Milton is again seeking how to invest the now sum of $2.5 million dollars in federal earmarks secured for East Milton by Congressman Stephan Lynch. A parking lot on the park/deck has been prohibited by state and federal laws.

Issues may include opening or permanently closing the Adams Street bridge, and converting the landscaped park into an activity platform for food trucks, public gatherings, possibly flea markets, concerts and farmers markets.

In 1959 the Southeast Expressway opened with an ugly, divisive “canyon” in East Milton. 121 houses were displaced, 12 businesses were closed and the 7-acre East Milton playground on Squantum Street was sacrificed.

Little understood was the fact that no public parking spaces were lost to the Expressway. In fact, about 40 new spaces were created across from Bassett Street and between the Wood Street ramps

The Board of Selectmen over a period of 80 years has sponsored and supported numerous articles to create more public parking in the area. Each of the several proposals have been defeated by Town Meeting. These efforts included acquisition of the Warshaw Laundry property at 4 Franklin Street and the Adams Court/ Bassett Street four house lots, which would have provided 41 spaces. The Selectmen’s effort to purchase 2 acres from Carleton Ford was rejected by Town Meeting. The 30 guaranteed public spaces were lost when Town Meeting voted down a second deck proposed between Bassett Street and the Blue Hill bank building. In 1950 the Town Meeting refused to purchase railroad land on Granite Avenue.

Be the first to comment on "Parking lot over East Milton overpass prohibited. Now what? (Part 2 of 3)"