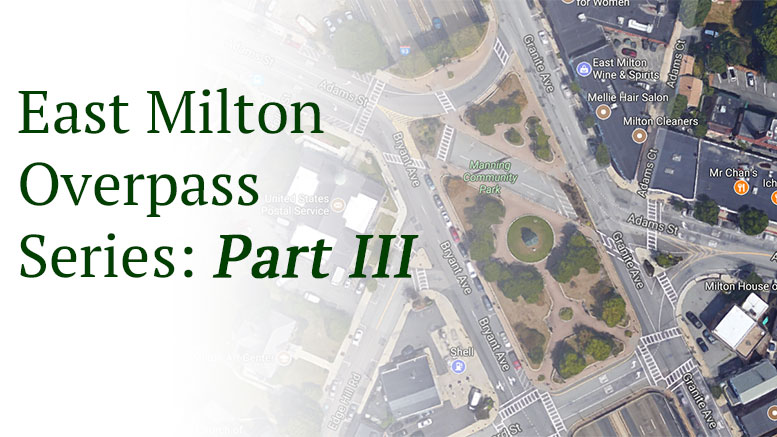 This is part three of a three-part opinion series, contributed by Milton resident, John Cronin.

A public hearing regarding plans for the East Milton overpass will be held tonight, Wednesday, September 13, 2017 at 7:00 p.m. in the Council on Aging Building at 10 Walnut Street.

Across from the East Milton Post Office is a park, which is the subject of a public hearing, by the Selectmen, scheduled for this Wednesday, September 13. Recently the Town learned that a proposed 25 car parking lot was prohibited by both state and federal park protection laws. At issue is whether to change the park to an activity platform for food trucks, farmers markets, and other events, possibly including flea markets, concerts, and public assemblies. Without the now cancelled parking lot, parking on the neighborhood streets may be required. Also, the reopening of the Adams Street bridge may be discussed.

The concrete landscaped deck and park actually caps the ugly SE Expressway “canyon,” but is rarely acknowledged as a historically unique site.

Through the locus of this park in 1657 passed the Boston to Plymouth Highway, the first highway in the nation, and in 1866, the Granite Railroad, the first railroad in the nation. I-93 one of the very earliest Interstate Highway opened in 1959, (which was under design as President Eisenhower in 1956 proclaimed the Interstate program). From 1896 to 1920 the electric Street Railroad connected residents of Boston, Milton and Quincy. Thomas Handasyd Perkins, the first President of the Granite Railroad and went on to found the earliest steam railroads.

In 1993 the Board of Selectmen, MassDOT and the FHWA agreed to build a 300 ft. by 400 ft. landscaped deck, to cap the SE Expressway “canyon,” provided the Town committed to maintaining the landscaped park. The Town has struggled with that obligation. The irrigation system is in ill repair.

In 1997 the Governor signed into law Chapter 82, dedicating the park to honor former State Representative M. Joseph Manning, an East Milton native, former Park Commissioner, senior Town Meeting member who had worked effectively with Congressman Brian Donnelly, the Board of Selectmen, and the mitigation committee to build the park/deck. Chapter 242 of the Acts of 2012 provided an earmark for alterations and improvements for the M. Joseph Manning CommunityPark.