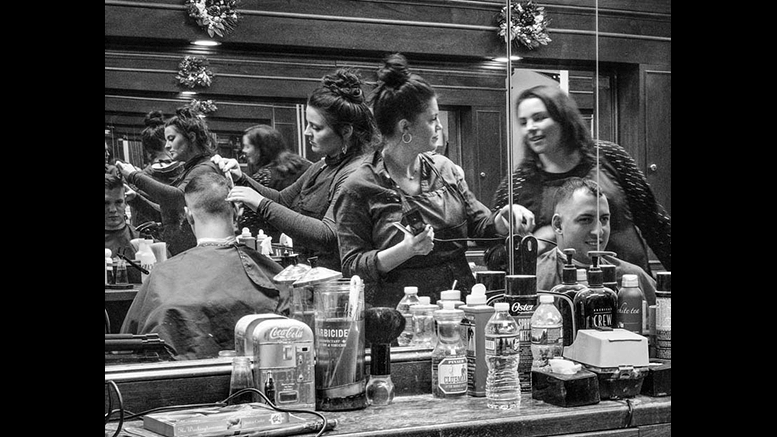 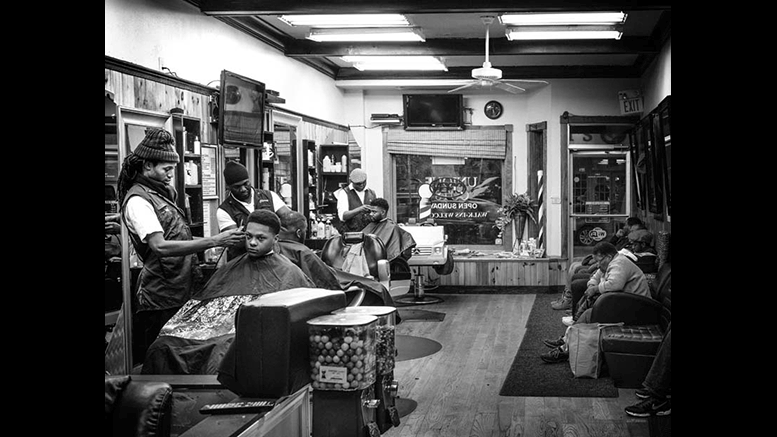 During the month of October 2017, the Wotiz Gallery of the Milton Public Library will feature a series of black and white documentary photographs by Boston photographer Jim Scherer.   The exhibit, titled “Haircut,” is a look into the customs and social life within diverse barbershops in Boston.   Talking about the project, Scherer says: “Sitting in the barber’s chair can be a relaxing moment. There’s not much you can do but put yourself in the barber’s hands and let him do his job. You’ve entered a special club, where you’re free to join the conversation with others you may not know, or just daydream. You’re bonded together.”  He goes on: “I became interested in this social and cultural aspect and began to document it, first with my own barber, Aidans, in Dorchester. As I explored more barbershops, I noticed how those that serve different communities have their own look and customs.”  Jim Scherer is best known for his food images, which have appeared in the Boston Globe, various cookbooks, and in advertising work for food clients such as Trader Joe’s, Boston Beer, and Dancing Deer. The Haircut project appeals to him because it is so different from his usual work and offers a fresh challenge.  The exhibit will be on display in the Wotiz Gallery between October 2nd and 31st.  There will be a free and open reception held from 6-8 PM on Thursday, October 19th with the photographer present.   If you would like to apply to show your artwork at the library, contact Jean Hlady, Adult Services Librarian, at 617-698-5757, x. 3.  The Milton Public Library is located at 476 Canton Avenue.

Enjoy a taste of the Caribbean right here in Milton