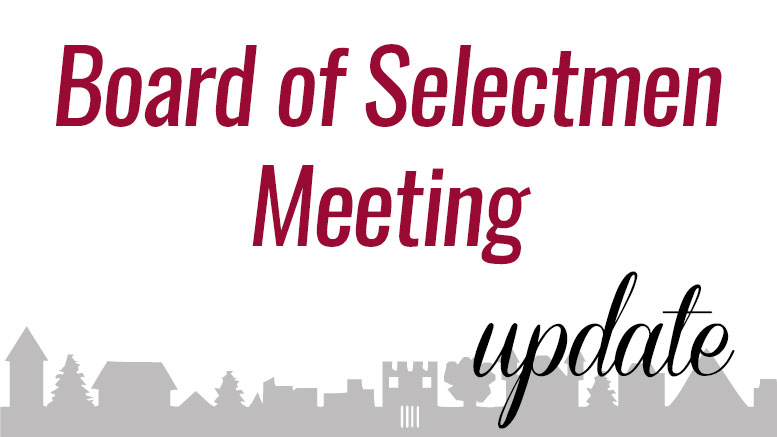 The new five member Board of Selectmen met at the Council on Aging on May 2. Katie Conlon acted as chair.

Regina Malley, chair of the Parks Commission, read a statement during Citizens Speak from the newly formed Milton Youth Advocates in support of a youth center in town. The group formed last November and has met with community leaders to discuss youth programming. The statement was read to the Master Plan Implementation Committee as well as the Parks Commission. A survey regarding youth needs has been issued to high school students and will be sent to middle school students soon. It was asked that the survey be promoted with students encouraged to respond.

The topic of the former Hoosic Club at 193 Central Ave. drew much public comment. The application will go before the Board of Appeals on May 3. Conlon noted the Board of Appeals is the governing body, however, the presentation Ned Corcoran, representing the new owners the Kelleys, was requested to poll selectmens’ potential support. Support for the Kelly’s intentions is split among abutters and the neighborhood. Issues such as noise, parking, and trash became issues with the Hoosic Club facility. The proposal before the Board of Appeals is for Peter Kelly to continue operations at the facility as a function hall at least for a probationary period. The Milton Club is being formed as an association of Milton residents to preserve the historic building that was erected in 1913. Corcoran pointed out that the building is an historic site and is part of the historic district. Corcoran stated the owners believe the proposed uses are the best way to preserve the building.

Melinda Collins asked what recourse neighbors would have during a three year probationary permit should there be complaints from abutter. The Board of Appeals could terminate the permit if they deemed it necessary to address conditions. Richard Wells asked they Kellys if they still intended to create a paved parking space on site to address parking, which is in development. Mike Zullas asked clarification on the assumed revenues for the proposed business plan. Larry Moulter led opposing comments of the proposed use of 193 Central Ave as a function hall, noting that the facility has many issues that need to be resolved. He said that if a liquor license is sought it will be the largest restaurant and bar in town. It was asked that endorsement by the Board of Selectmen be withheld as it carries great weight with the Board of Appeals. The neighborhood group is opposed to a function hall within the residential neighborhood. A substantial amount of events would be needed to support the substantial financial investment put into the building. Other residents near the building were willing to support the developer as the proposal has potential to benefit the youth and seniors of the town.

Richard Wells made a motion take the matter under advisement, and could hear the matter again pending actions by the Board of Appeals. The motion was agreed to.

The selectmen will reorganize its officers after Town Meeting. This is a standing custom designed allow for due consideration in organization. A financial policy committee and youth task force were suggested as well as a traffic mitigation committee as possibilities for the new board.

Town Administrator Michael Dennehy reported that the Hendries demolition was delayed due to complication with the Department of Environmental Protection. According to Dennehy, it is being continually worked upon and is due to progress soon. The town received a $30,000 grant to make the playground at Andrew’s Park ADA compliant.