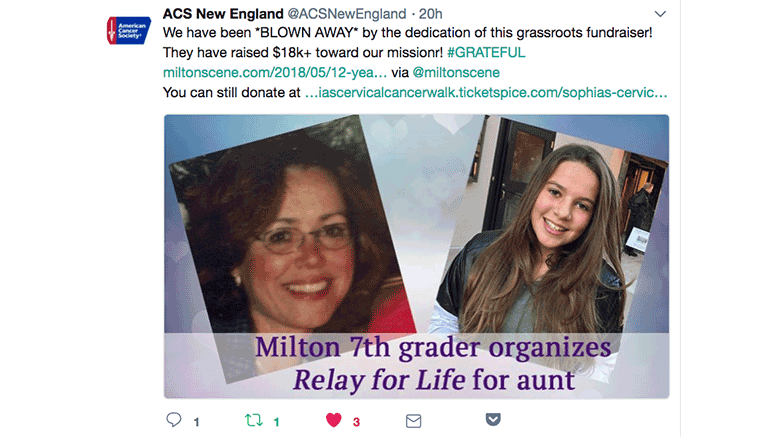 12 year old Miltonian raises over $18,000 for American Cancer Society in honor of her aunt

Milton resident Sophia Morse organized a Relay for Life-type event on Friday, May 18.

As of press time, Sophia’s event has raised over $18,000 in the fight against cancer!

The American Cancer Society of New England has been “blown away” by the success of Sophia’s event:

We have been *BLOWN AWAY* by the dedication of this grassroots fundraiser! They have raised $18k+ toward our missionr! #GRATEFUL https://t.co/sd2cCShzBR via @miltonscene
You can still donate at https://t.co/MvzGCd7O1j pic.twitter.com/EebVFpL2YL 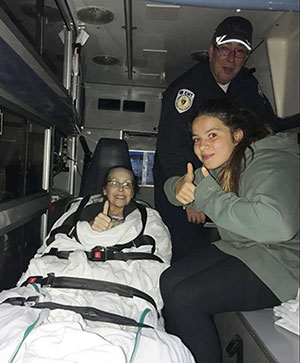 Sophia woke up at 3am so her family could drive to Spaulding in Cambridge because she wanted to transfer in the ambulance with Gigi for her first big chemo treatment.

Sophia’s aunt, Jeanne Dolan, “Gigi”, (Milton Academy ‘80) was diagnosed with an aggressive form of cervical cancer on December 29, 2017. The last 4 months have been brutal for her, as she’s been hospitalized at Mass General Hospital since late January following emergency open heart surgery – the result of numerous blood clots caused by the cancer. Gigi has been undergoing intensive radiation and chemotherapy treatments for the last three months, and is fighting this cancer with all her might, but her long-term prognosis remains quite guarded.

For the service component of her project, with the assistance of Milton Academy’s administration and facilities department, Sophia organized an abbreviated “Relay for Life” in Gigi’s honor, which took place at the Milton Academy track on Friday, May 18th from 6 p.m. to 12:01 a.m. the following day.

Sophia partnered with the American Cancer Society and all of the proceeds of her Relay will go directly to cancer research and funding for patient services.

There is still time to donate!

All proceeds will go directly to cancer research and funding for patient services.

The Milton Historical Society presents “An Evening with Eleanor Roosevelt”

Be the first to comment on "12 year old Miltonian raises over $18,000 for American Cancer Society in honor of her aunt"