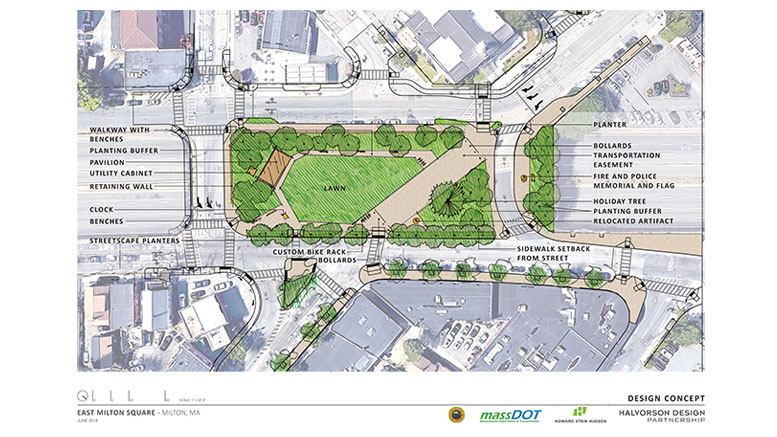 The Board of Selectmen met on June 11 to discuss, among other items, the design for the East Milton Square deck.

Richard Wells started the meeting by expressing condolences for the recent deaths of Josephine Grant, wife of Fire Chief Jack Grant; Bill Bulger, husband of Nancy Bulger of the town’s accounting office, and Paul Dolan longtime Cemetery Trustee. He led a moment of silence to honor their passing. Each were valued members of the community and will be missed.

Brigid Myers of Howard Stein Hudson and Richard Houghton of Halvorson Design presented with William Clark, Town Planner, the landscape architectural designs for the East Milton Square Deck. The board, for the first time, heard that the project may not make a January 2019 due date mostly because of delays with federal contracts. The January date is for MassHighway to advertise for construction proposals. Designs need to be agreed upon by that time.

Clark confirmed days after the meeting that state and federal authorities have been contacted. The funding is not endangered by the delays as had been originally feared. Even with such reassurances, Wells proposed holding public meetings in East Milton as soon as possible to solicit public opinion on designs for the park. Sessions for public opinion is part of the design approval process.

The funding is not endangered by the delays as had been originally feared.

Wells also stated that the new design originated from the fact that there is lining under the deck that needs to be replaced. Katie Conlon followed up with asking how the community could provide input regarding designs. The board came to a consensus that at least one meeting was needed.

Wells suggested scheduling a public meeting within the next two weeks to present the design to the public and solicit opinions. The designs include leaving a paved space along the former Adams Street, installation of the historic clock and other historic relics, as well as trees and greenery to draw pedestrians into the park and away from the streets. The designs are intended to increase the use of the park. A redesigned Manning Park provided much needed green space to offset development in the commercial district. However, the prolonged timescale of the project was a significant concern.

Wells suggested scheduling a public meeting within the next two weeks to present the design to the public and solicit opinions.

Answering questions posed by Vice Chair Michael Zullas, Myers said the January 2019 advertising due date for designs would not be met but state funds are currently earmarked. She said if the design process moves through the 75% and 100% phases expeditiously, and all other parts of the process fell into place construction could start Spring 2021. Myers said she found out the day of the hearing that the advertising date would be missed. “Once it was advertised it would be another one or two construction seasons … best case the construction would be done by end of 2021.” Myers said

“Once it was advertised it would be another one or two construction seasons … best case the construction would be done by end of 2021.” – Myers

Wells asked if public input happened soon could the 75% and 100% portions of the design be made on schedule. Myers stated it could be possible. Clark stated the problem was at the federal level, and the issue is that the matter had to go through the federal highway contract process. He said calls were being made and they were talking with whoever needed to spoken to to move things along but they were dealing with the federal process. Town Administrator Michael Dennehy also will reach out the federal highway administrator to help expedite the process.

Zullas, and the board, expressed concern that it could take three more years to complete the project.