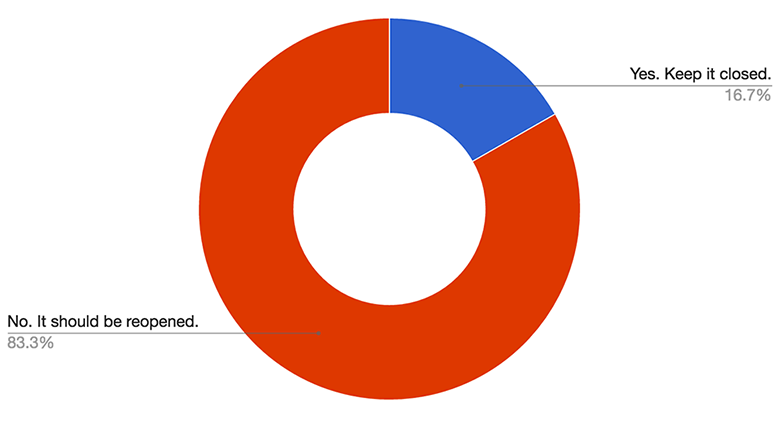 In a survey that ran October 7 – 16, 299 Milton Neighbors expressed their opinion in a simple one question poll:

Do you think the Adams Street overpass should remain closed?

People had a lot to say!

“Massive waste of money, pointless exercise, The Square looks like a rundown, tired eyesore… which we all have plenty of time to look at when stuck in the interminable traffic jams.”

“It’s a waste of space and creates unnecessary traffic backups. The town needs to do more to keep cut-through traffic off of side streets and not block a main thoroughfare.”

“The real traffic problem is the exit from the expressway that dumps on to Willard/Granite Ave.  It’s a hazard  and  creates much more traffic in East Milton Square, and the people coming off 93-N drive hazardously fast through the area. If that exit were shut down, I bet the vast majority of the traffic back-up problems would be alleviated.”

“Spent millions on architects, specialists over decades on this. Still remember the popsicle sticks on the deck for the park. Someone has made a lot of money on our poor planning.”

“It’s really insane that it’s been closed for so long. Just open it up for God’s sake. Politicians make it so complicated. Why is it that Quincy can make changes light years faster than Milton?!  It causes the biggest traffic jams in town and makes zero sense… nighmare to deal with EVERY SINGLE DAY.”

“The design is so horrible, I am nearly killed every single day as I cross Adams Street by the post office. Drivers do not yield to pedestrians with the WALK light, and they don’t stop for the red light, whether going right or left. While part of this is bad driving, a lot of it is also due to the confusing design. I live in the square and there are accidents every other week where people try to go straight and drive over the barrier. It looks horrible. It’s dangerous, and it IS NOT WORKING.”

“No one ever sits there to us the overpass park. It’s not at all a calming place with the hum of traffic in the background.”

“Walking to East Milton I was approached by couple. She was coming back to see in daylight where she had drove straight and into no mans land! Couldn’t believe others hadn’t done same. Just a couple weeks ago. So dangerous to try cross the street there anyway.”

“They really really at the very least need to look into the light cycles as it affects all surrounding neighborhoods!”

“It was a huge mistake to close it…traffic is always a mess especially between 3:00 – 6:30 p.m. and getting progressively worse…people speeding to beat the lights and traffic from expressway.”

“That area has the worst traffic backups and I avoid it whenever possible. I don’t go to East Milton unless it’s the “right time” and take pains to avoid it otherwise. Also the pedestrian crossing light is so slow it may as well be broken (the one near Bruegger’s Bagels) as I’ve crossed long before it finally stops the cars.”

“Would be interested in have the East Milton Square Parking and Access Study published. IF the overpass were to stay closed then a significant reworking of the light timings, existing lanes and signage would be needed in order to alleviate the existing disorganization and burden that has been placed on the surrounding streets.”

“The traffic study and changes were done before Waze and other apps became a given. These smartphone apps have changed everything about driving. People going through the square are often neither residents nor ‘regulars’ familiar with the area. This leads to even worse driving and worse respect for traffic signals. So, now you have a horrible design *plus* tons of additional traffic. What a dangerous, ugly nightmare.

“The traffic has been an absolute nightmare since the closure. And it has progressively been worsening. Traffic light cycles seem to be set to benefit the closure of the overpass to the detriment to everyone else.”

“It’s actually even dangerous for pedestrians as it is a little hard to tell what the cars can and can’t drive on.”

“I wouldn’t mind it so much if the space that was formally used to get through East Milton was made into a useful park or a place where people actually gathered.”

“The rotary-style intersection should be a better and more efficient way to handle traffic. However, what should possibly then warrant consideration are eventual improvements and widening of the adjacent one way crossings over 93 so that all traffic can flow better.”

“Anyone with ONE BIT of common sense can see it currently is a fiasco, The overpass should be re-opened.”

“Its an eyesore. If it is not opened, additional parking should be set up there. Even if it is only 4 or 5 spaces. We need more parking.”

“Granite Ave is a big problem. There are a lot of cars getting off at Granite Ave to bypass the high way. It’s in both directions north and south.”

“Such a nightmare, every single day. Open the road back up!!!”

“It was my understanding that the overpass space was to become parking. If that’s not happening can we have a street back? Who’s in charge of this mess?”

“I have never understood why this was done… that rotary is nothing but a log-jam.”

“It has been a disaster and there is no end in sight.”

“Move the barriers, reactivate the traffic lights and open up the overpass. It’s much more efficient to send cars straight through the square. I think it would alleviate the traffic on the Breugger’s corner…that intersection is very dangerous. The barricade is a reminder of how things can’t get done in this town.”

“Having it closed makes it very inconvenient to get through the square. Please open it back up!”

“Four years is a long time for a test but the East Milton Square parking and traffic issues has lacked management and direction for years. This whole project has been trial and error while unannounced pattern changes are implemented like an elementary school science experiment. We add restaurants and valet parking and more patio dining space for an area with a rat problem. This whole effort is a farce and the people who suffer the most for it are the East Milton Square residents. How about an update and plan going forward. Oh wait – that must be coming after the Hendries site gets straightened out. Katie Conlon ran on this issue and we have crickets from her.”

“This was an ill-conceived and idiotic endeavor…time to change it back.”

“I also ride my bike through and it is very unsafe for commuting on bicycle with people speeding through and the confusion of traffic flow. I am a new east Milton resident.”

“Parking on the deck only makes sense if it’s part of a coordinated plan to develop East Milton square. Real problem right now is that traffic is so bad no one in their right mind would walk to the square.”

“The real problem is traffic has increased everywhere. Many studies are now showing that it is caused by smart phone use… also the entire traffic light system around the square will be replaced along with the deck remodel 2016-17. The current system is about 30 years old.”

“Don’t overlook the backup it causes on Edge Hill. Turning left from Grafton in the morning is dangerous and sometimes impossible because of the intersection blockers.”

Hurry up and get the deck done! Every time they put out a new plan they reduce the number of parking spaces. Let’s be honest no one is going to go sit on and overpass! Having a little green space is nice but increasing the parking is the priority (which is the major problem in the square)!”

“Too many near collisions!”

“The traffic flows much better with this in place.” 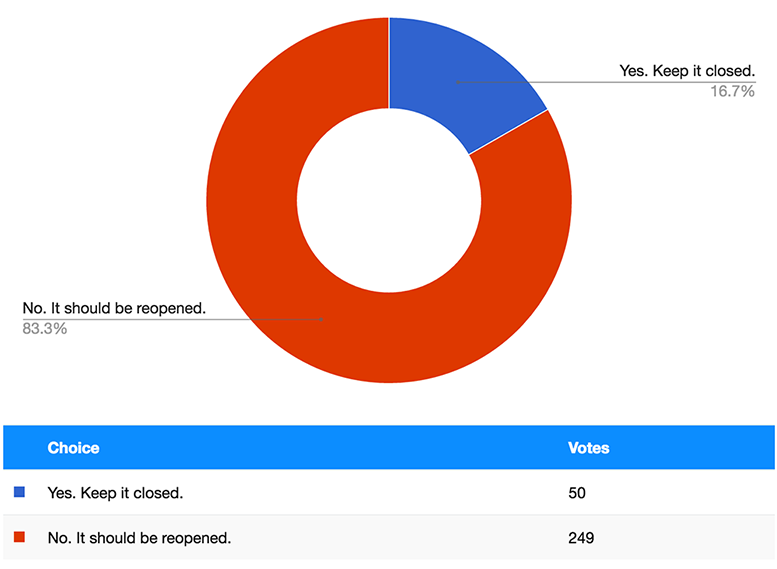 POLL RESULTS: Should Halloween take place as usual this year?