Home » News » Poll Results: What should be the replacement name for the Board of Selectmen? 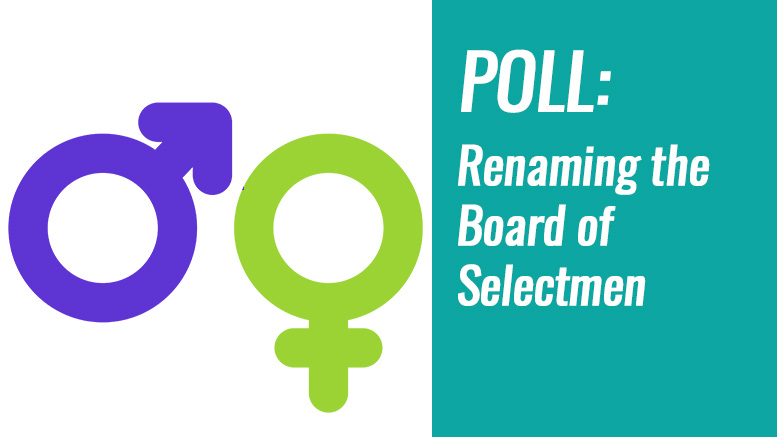 During the upcoming October Town Meeting, Town Meeting Members will vote on changing the name.

What should the new name be?

“It amazes that in 2018 this should be an issue. Nantucket recently voted to rename the Board of Selectmen to Select Board in April of this year. Brookline did the same thing last November. So, I think we can all agree that although Select Board may be a bit “clunky”, it is more than time to come up with another name. Town Trustees is nice, and sounds a bit more elegant than Executive Board. But let’s stop delaying and make the change now!” – M. Baumgartner

“Try to keep with a historical sounding name. Avoid executive which sounds too corporate.”

“Executive Board of the Town of Milton.”

“The only name I don’t like is “Select Board”, but I think Board of Governors is the most concise and direct.”

“Town Council is used in at least one other town that changed from selectmen. It should be an option in this poll. Trustees and board of governors shouldn’t be options. Selectmen are not trustees.”

Several participants pointed out that we will also need to change the title of individual board members:

“It is very important to consider what to call the members of the board individually. I think Select Person would be the proper term. If the board’s name was changes to Town Trustees or Board of Trustees, the individuals would obviously be simply Trustees.”

“And for the person, selectee.”

“I guess Chairman should be changed as well. I wonder if the person that started this is going to contact the government to change Servicemen?”

And, last but not least, this gem:

Duplicate votes were removed from this poll.

Be the first to comment on "Poll Results: What should be the replacement name for the Board of Selectmen?"