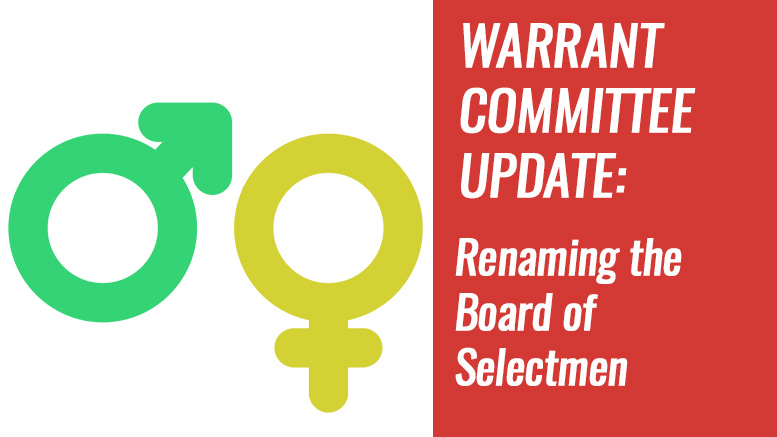 Warrant Committee embraces neutral names for Milton Board of Selectmen

On Aug. 20 the Warrant Committee met to begin reviewing the articles slated to be put before the special Town Meeting in October.

The committee expressed enthusiasm for the article. Emily Armstrong, member of the group behind the Citizen Petition spoke to the committee. She explained the history of the petition and how there came to be two articles on the same issue. She said the selectmen corrected some of the language in the petition when drafting their article.

The Warrant Committee voted to recommend Town Meeting approve the article, with six members voting in favor. There were four abstentions. The abstaining members, while expressing favorable or neutral opinions of the article, requested further information about potential impacts of the article. These members privately expressed, after the meeting, regret as having to go on record abstaining on an important issue they otherwise favored. Members wanted more information such as what the costs for the changes would be, including if it applied to any current signage. These attempts at due diligence were set aside by some members citing the importance of the issue, “I don’t care what it costs,” stated a member voting in favor. Another concern was how the vote would affect the Citizens Petition proposing near identical changes. The petition was not voted on. The concern is that there will be confusion at Town Meeting regarding two articles making similar, but not completely identical, changes to the bylaws. That was not addressed, and both the article and petition are due to be presented to Town Meeting.

Though there was no connection, the changes in the approved article mirror sentiments expressed in a recent poll conducted by the Milton Scene.

How can YOU help with stormwater pollution and trash & recycling in Milton?