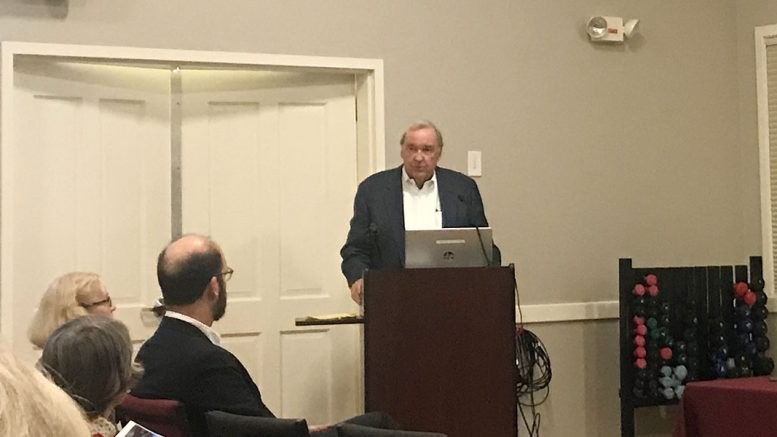 At a well-attended airplane noise and pollution forum held by Milton’s Select Board and Airplane Noise Advisory Committee (ANAC) this past Thursday night at the Council on Aging, it was revealed that Milton appeared to have missed a March 2019 deadline for a critical submission of feedback relative to a years-long aviation noise study being conducted by MIT scientists.

Commissioned by Massport and the FAA, the study seeks to explore ways to reduce the impact of airplane noise over the communities surrounding Logan Airport through potential changes to routes and procedures. Milton did eventually make the requested submission in July of this year.

The impact of the late submission was highlighted in a response to a question from local resident Judith Gundersen as to why other communities were having community meetings on their MIT study submissions, when Select Board member Katie Conlon informed the audience that communities that had timely made their submissions were further ahead than Milton in having their requested feedback considered as part of the MIT study process and, therefore, have more to discuss. Conlon stated that when Milton catches up with those other communities the town may way well have additional public meetings.

The March 2019 deadline was apparently set by the Massport Community Advisory Committee (MCAC), an assembly of appointed representatives from towns and cities surrounding Logan, for communities such as Milton to provide their feedback for the applicable portion of the MIT study. In response to a question from Gundersen about the Select Board’s process for making its submission, Select Board Chair Michael Zullas advised that the town was not informed of its apparent failure to timely provide the requested feedback until June of this year at an in-person meeting with officials from Massport and the MCAC where the town was invited to make a tardy submission. The meeting was said to institute a “reset” in the relationship with the Milton following the May 2019 appointment of the town’s new MCAC representative, Thomas Dougherty. Dougherty, a prominent local attorney, was installed in the position by the Select Board following the April resignation of Cindy Christiansen as MCAC representative, a post which she had held since 2016, and her contemporaneous removal by the Select Board from that role as well as from ANAC and the Logan Community Advisory Committee for conduct inappropriate of a town appointee.

Following the MCAC’s invitation to make the late submission, Zullas described a strident effort to compile the town’s response resulting in requests and recommendations from the town running over 100 pages with attachments. Under a tight deadline, Milton’s then-proposed requests and recommendations were discussed at two public meetings of the Select Board prior to submission in early July. Assembled town officials were unable to provide information when asked by resident Peter Dunn as to who at the town missed the critical March 2019 MCAC feedback deadline.

The forum ran for over two hours and included presentations by Andrew Schmidt, the chairman of ANAC, Dougherty and Zullas.

Schmidt indicated that, while the number of airplane noise complaints submitted from Milton was the highest among any of the communities surrounding Logan, the number of individual complainers from Milton was down by approximately half from just a few years ago. He urged residents to continue with their complaints and to encourage others to do the same, as complaints are important data points indicating the need for relief.

Dougherty, who was recently elected to the MCAC executive committee after less than six months on the job, gave a primer on aviation law and stated that federal law gives the FAA exclusive control over airspace meaning that states, municipalities and airports essentially have no say on airplane traffic. Dougherty discussed an ultimately unsuccessful effort in 2018 to try to make changes to federal law that would have mandated that the FAA consider the impacts on overflown communities and provide additional relief. Zullas later informed attendees that town officials continually urge changes to federal law in meetings with federal elected officials such as Senators Edward Markey and Elizabeth Warren as well as Congressman Stephen Lynch.

Dougherty also responded to inaccurate information concerning the MCAC process with respect to the study by making clear that the timeline for the MIT work on the applicable submissions and consideration by MCAC has been extended with a completion target of next June. He went on to discuss the town’s requests and recommendations in connection with the MIT study. He first described one of the submission’s principal elements as being a restoration of the dispersed flight paths in effect immediately before the FAA’s implementation of the GPS guided NextGen navigation system that has concentrated air traffic onto much-narrowed runway paths. In addition, he also informed those in attendance that the town has recommended that air traffic control better police arrivals over the town to require them to maintain the existing glide-slope requirements that would keep flights at a higher altitude than what is presently being observed. Dougherty also discussed delays in ongoing fieldwork conducted by MIT.

Dougherty went on to describe a town request in the submission relative to support for the testing of a possible Boston waypoint change with respect to takeoffs from runway 27. Although much fewer in number than arrivals, takeoffs from runway 27 travel from Logan, pass just south of downtown Boston and then proceed to Franklin Park where they then fan off in various directions depending upon a flight’s destination. Some of the southbound flights pass over portions of Milton. Dougherty indicated that Massport and the FAA had previously stated that these southbound planes had no impact on the town.

According to Dougherty, new FAA data presented to the MCAC actually showed an impact on Milton. Dougherty explained that the town’s submission indicated support for evaluating a possible waypoint relocation thereby giving Milton a seat at the table as to the applicable runway 27 discussions. He pointed out that the submission was for illustration and subject to modification and, as a former director of the lawyers’ committee on civil rights, Dougherty made the case that, in addition to disagreements in Boston on the subject, federal law prohibits undue environmental impacts on minority and low-income populations and that the proposed waypoint change impermissibly indicated additional traffic over Mattapan before flying on to Milton making the proposal impracticable. Nevertheless, by asking to be included in waypoint testing, the town now has a voice in the runway 27 discussion – something it would not otherwise have had.

Later in the hearing, Christiansen criticized the town’s MIT submission with respect to runway 27 insisting that the FAA would use the submission against Milton. David Godine, a member of ANAC, responded by pointing out that Milton takes 40% of Logan’s arrivals on runways 4L and 4R while runway 27 traffic was between 9% and 15%. He went on to state “…what’s really affecting Milton is not 27 it’s a red herring issue. At this this point it’s not worth discussing. Concentrate on the prize, the prize is the 4s.”

In addition to continued advocacy for change at the federal level in meetings with members of the state’s Congressional contingent, Zullas also described further efforts on airplane over-flight issues such as an independent noise study by Boston University’s School of Public Health, the town’s purchase of an air quality monitor and associated collaboration with environmental academics from Olin College as well as discussions with the state attorney general’s office with respect to prospective avenues for relief.

Residents who wish to submit airplane noise complaints can do so online by clicking here or call Logan’s complaint line at 617-561-3333.

Be the first to comment on "Milton makes strides in fight against airplane noise, but efforts hampered by apparent missed deadline"