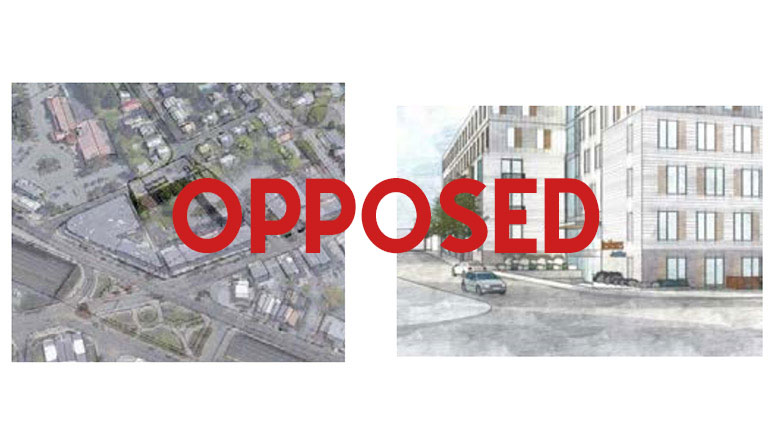 The following was submitted to Select Board by the East Milton Neighborhood Association:

We are writing to you on behalf of the members of the East Milton Neighborhood Association in regards to the proposed Falconi and Corcoran 40B project – The Residences at East Milton.

The objectives of the East Milton Neighborhood Association are:

In August of 2017, the Falconi company reached out to the EMNA Board asking us to attend a meeting at the Milton Public Library. At that meeting, they presented a plan for a mixed use building, Adams Court, which included retail, commercial, and 71 apartments. Over the next year, our neighbors and members attended many meetings and voiced their concerns and feedback via email and in person meetings. The EMNA formed a working group to meet with the developer and that group met with the developer numerous times in an effort to help the developer receive feedback from the neighborhood. The EMNA sponsored 3 town wide meetings with the developer each with over 250 people in attendance including neighbors, residents, as well as state and local officials. In general, the residents supported mixed use development at a smaller scale more fitting with the village character of the neighborhood.

The last public offer from the Falconis was presented in June of 2018. This proposal outlined 64 units as follows:

The design presented in June 2018 was much more in line with the neighborhoods requests. The building still had a 4th story and the working group had requested a 3 story building at maximum. The working group believed it had made a lot of progress and was incredibly close to reaching an agreement. By that point, the Falconis walked away and indicated that they did not want to meet with the working group or neighborhood again.

Subsequently, the Milton Planning Board initiated a process to make plans for East Milton Square including a ULI tap and visioning sessions in which the Falconis and other land and business owners participated. A shared vision for development in East Milton was making significant progress including public visioning sessions with the neighborhood and the formation of a Steering Committee with members from Select Board, Planning Board, EMNA, and business owner, and land owners.

In March of 2019, the EMNA learned of the 40B application when a reporter from the Milton Times sent an email requesting a comment from the neighborhood association. There was no public outreach on the 40B proposal from the Falconis or the Joseph J. Corcoran company prior to its filing. Shockingly, the unit count was 1.7 times greater than the last public offer – 111 residential units rather than the 64 units last presented. The floor count on the 40B is 5-6 stories tall which is far greater than any other structure in East Milton. The proposal also was only residential, rather than a mix of commercial and and residential.

Residents have expressed concerns over the density of this 111 unit project on 1.09 acres. The design of the current proposal is at direct odds with both the current residential and business design in East Milton Square and those discussed in the ULI and other discussions. The proposed density has no comparison in the entire town. The proposed design shows flat walls pressed up against narrow sidewalks unconducive to pedestrian traffic. The design does not provide enough parking for visitors and will exacerbate the existing parking burden for local businesses and incentivize overflow parking on the adjacent residential streets. The site has woefully inadequate access to public transportation. The neighborhood has continued to raise concerns over traffic, parking, safety, and the environmental impact (particularly hydrological issues as numerous residents report that Franklin Street is prone to flooding), none of which have been adequately addressed.

In conclusion, while our members are generally not opposed to development in East Milton Square, we do feel the scope and size of the proposed 40B project is too large. The neighborhood has stated it wants a building that is three stories high, with retail space, which would be more fitting to the current character of the neighborhood. The over-sized nature of the project is further demonstrated by the financial feasibility of the developer’s last public offer as outlined above – a project with 58% of the units in the current project. We also feel the number of units is excessive and will present an even larger burden on public safety, traffic, parking town infrastructure, and the general quality of life of all the residents in Milton.

The East Milton Neighborhood Association Board

Be the first to comment on "East Milton Neighborhood Association opposes scope, size of Falconi and Corcoran 40B project"