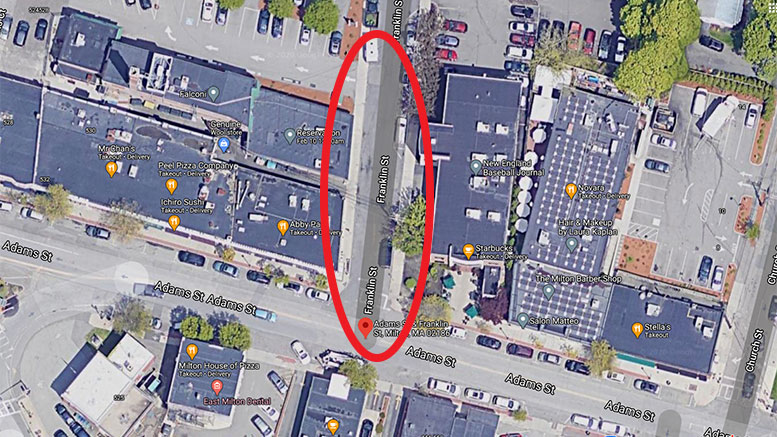 A new proposal to create an outdoor plaza at the end of Franklin Street at Adams Street met with mixed responses from residents in the neighborhood. The Milton Planning Department is seeking to apply for a state grant to fund the proposal.

The space would give local restaurants a shared space for take-out dining. It would include picnic tables, an outdoor screen and projector, a hot beverage/snack bar kiosk, and overhead string lights.

The outdoor plaza would close the end of Franklin Street from Adams to the entrance of the Starbucks parking lot. 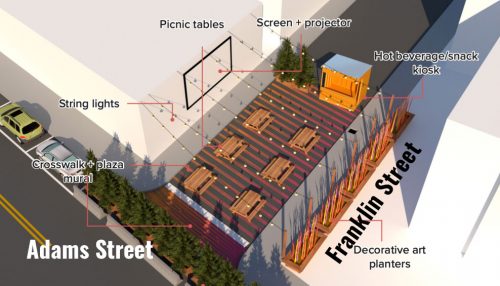 Rendering of Winter Plaza at Franklin and Adams Streets

Residents of the neighborhood had mixed feelings. Main concerns included traffic flooding adjacent streets, and the PTSD-like worry that testing the plaza would inevitably make it permanent, similar to the two week “test” closing of Adams Street in 2011.

Other residents lauded the efforts for their support of local businesses and creation of a fun, safe social environment during what are sure to be lengthy pandemic-fueled winter months. Another neighbor pointed out the capitalization on available funding through the CARES Act, with furniture that could be utilized elsewhere if it doesn’t work out, as a huge plus.

The initial proposal is to close off the end of Franklin Street at Adams Street, full time.

What do you think about the proposal?

Pop us an email with your thoughts to [email protected]