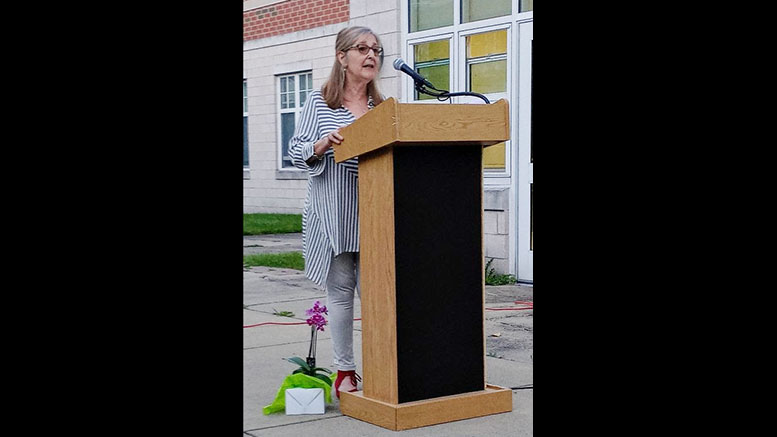 After six years as the Director of the Milton Substance Use Prevention Coalition, Laurie Stillman is retiring at the end of this month. Last night, members of the coalition along with special guests, were able to gather in the courtyard of Milton High School. Caroline Kinsella, Director of the Milton Health Department and Chair of the Coalition, described the founding of MSAPC and expressed her gratitude to Laurie for everything that she has done for our community.

Senator Walter Timilty and Representative William Driscoll were both in attendance to read citations from the state Senate and the House of Representatives recognizing Laurie’s years of public service. Norfolk County District Attorney Michael Morrisey spoke about the importance of prevention work and thanked Laurie for her leadership in Coalition work.

Select Board Chair Katie Conlon and Select Board member Melinda Collins proclaimed September 21, 2021 to be “Laurie Stillman Day” and thanked her for her dedication and work to improve the health and wellness of the residents of Milton.

More thanks and gratitude was shown by staff and coalition members. Chair Caroline Kinsella also announced the new staff. Former Project Coordinators Stormy Leung and Margaret Carels are now filling the roles of Co-Directors of the Milton Coalition. They look forward to continuing the primary prevention work that Laurie Stillman helped begin here in Milton.

Learn more about the Milton Coalition:

Be the first to comment on "Milton wishes a fond farewell to Milton Coalition Director, Laurie Stillman"