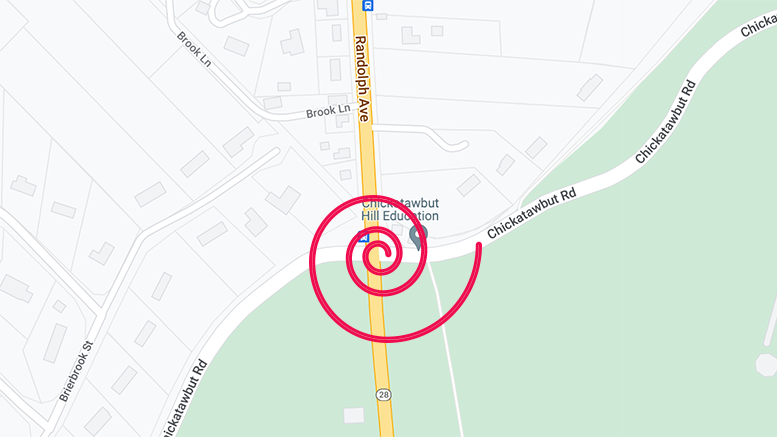 On October 27, 2022, MassDOT held a Design Public Hearing for the proposed project at Route 28 and Chickatawbut Road.

The Select Board met on Friday, November 4, 2022 to approve submitting a letter to MassDOT identifying a number of concerns with the proposed project. Click here to view the PDF letter.

Select Board Letter to MassDOT re: Route 28 and Chickatawbut Road Project

On behalf of the Town of Milton, we thank you for the opportunity to submit these comments to the Massachusetts Department of Transportation (“MassDOT”) regarding the Route 28 at Chickatawbut Road Intersections Improvement Project (Project File No. 607342). Thank you for your continued attention to this intersection which is consistently rated as one of the most dangerous in the Commonwealth. We are hopeful that MassDOT will listen and.consider the numerous public comments made at the Design Public Hearing on October 27, 2022 regarding concerns about the proposed roundabout design.

After participating in and viewing the presentation made by MassDOT and its design engineer, Howard Stein Hudson, on October 27, 2022 as well as discussing the proposed project at our Select Board meeting on November 1, 2022, we have the following concerns:

At the Design Public Hearing on October 27, 2022, MassDOT’s presentation noted that the previous public information meeting was held in Summer 2019, but there were subsequently no additional public meetings to solicit further input, provide project updates, or respond to concerns raised by the Milton community. It was at the Design Public Hearing on October 27, three years after the last public meeting, that MassDOT formally presented a design and solicited comments on a pre-determined solution. A public planning process that values community engagement does not go three years between public meetings.

We are requesting that MassDOT engage with the Milton community by scheduling additional public meetings and that MassDOT be responsive to the numerous concerns raised, such as: queueing that prevents residents from entering and exiting side streets and driveways, speeding and unsafe vehicular travel along the Route 28 corridor, impacts to streets such as Hillside A venue due to increased vehicle volume, as MassDOT anticipates and noted in the Design Public Hearing, and alternative designs for the intersection.

We are grateful for the efforts of the Boston Metropolitan Planning Organization’s Central Transportation Planning Staff’s Route 28 Priority Corridor Study which identified the numerous challenges residents face daily on Route 28, whether congestion during peak travel times or unsafe vehicular traffic due to speeding. MassDOT’s focus on this singular intersection means that the rest of the corridor is being ignored and improvements are further delayed. In addition, by focusing only on this intersection, MassDOT is not fully evaluating impacts of the roundabout design along the entire corridor and those impacts are not fully understood. We are requesting that MassDOT more fully evaluate how the roundabout will impact the Route 28 corridor and compare those impacts to an alternative design of a signalized intersection with dedicated left hand tum lanes.

Lastly, the Town seeks to better understand alternative designs, such as a signalized intersection with dedicated left hand tum lanes, and how they may compare to the proposed roundabout. While some information was shared at the Design Public Hearing on October 27, it was not clear that MassDOT fully evaluated alternatives. We are requesting that MassDOT share more information about alternatives with the Milton community. We ask that MassDOT more fully evaluate, in a timely basis, how alternative designs might affect traffic congestion, travel times, and safety and conduct additional public meetings to review these potential alternative designs. We also note the concerns raised by residents about whether the roundabout would, in fact, increase safety for pedestrians and bicyclists because of the lack of dedicated signals for safe crossing on foot or by bike.

Thank you for considering the Town’s comments and expectations. We agree that the intersection needs to be redesigned to prioritize safety and reduce congestion. We look forward to discussing it with you further. Please do not hesitate to contact Town Administrator Nicholas Milano ([email protected]) with any questions or for additional information.

Additional information about the project is available on the state’s website: https://www.mass.gov/randolph-ave-rt-28chickatawbut-intersection-improvement-project

Walking meditation at the Eustis Estate on Sunday 2nd, 2021

Superintendent Gormley Releases Updates For The Week Of February 24

Many Milton voters left confused at polls on Sept. 6