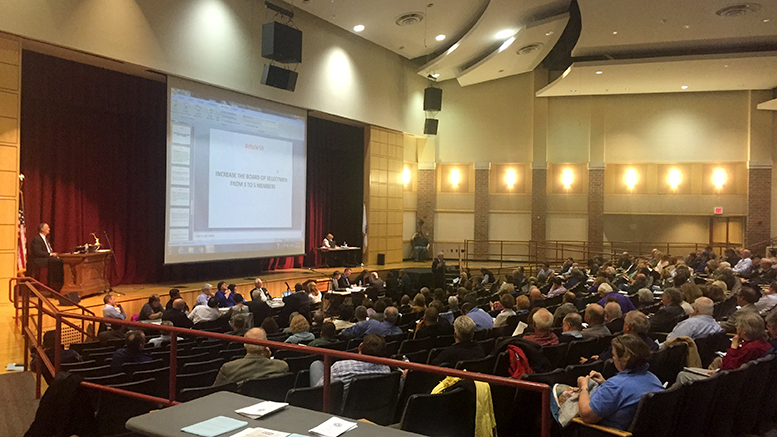 Most noteworthy was Article 8, to Increase the Board of Selectmen from 3 to 5 Members. As this author understands it, the yes vote on this article means that it will move to the legislative process, with an eventual result of it appearing on the spring 2017 Annual Town election ballot.

“RECOMMENDED that the Town vote to authorize the Board of Selectmen to petition the General Court to enact legislation relating to the membership of the Board of Selectmen in substantially the following form, 18 next annual town election after passage of such legislation, but not earlier than the 2017 Annual Town election, the Milton Board of Selectmen shall consist of five (5) members, and which would provide, without limitation, a process for an election to fill the two (2) new positions, for no change to the term of office of then currently serving members, and for staggered terms of the five (5) members of the Board of Selectmen; provided that the General Court may reasonably vary the form and substance of the requested legislation within the scope of the general public objectives of the petition; and to act on anything relating thereto.”

Leroy Walker and Philip Mathews presented the Town Government Study Committee’s findings, noting that in towns like Milton with a population over 20,000, five have three (3) board of selectmen members, and 39 have five (5) board of selectmen members. Mr. Mathews noted that in the interviews conducted, once communities move to five (5) member boards, they never experience “buyer’s remorse,” and do not return to three member boards.

Town Meeting Member Steve Fruzetti asked if this change was premature, wondering if we should wait to see how Milton’s town government functions with the new strong town administrator approved at last May’s town meeting. Former town administrator, Kevin Mearn expressed concern that nothing needed “a-fixin'” in Milton, noting that the three member board has always functioned very well — and that just because the Department of Revenue recommended the change didn’t mean we have to act on the recommendation.

Town Meeting Member Terry McNeil emphasized the point that Milton’s town meeting members don’t accurately represent the demographic of the town, and recommended that the under-40 population who is not involved in town government, have the opportuity to vote on the change in the board of selectmen.

Town Meeting Member Bob Hiss was concerned with the potential budgetary implications of the change. Though the salary for a board of selectmen member is low ($1500-$1800/year), the potential cost of the optional health insurance could be burdensome on the town’s budget.

After much dialogue, a standing vote was taken, and the article passed.

In keeping with the Town’s By-Laws, the Annual Town Meeting begins on the first Monday in May. It may run many evenings, but on average it completes in three. From time to time, Special Town Meetings may be called by the Selectmen or 200 registered voters to take care of any unforeseen issues that occur between Annual Town Meetings

The Annual Town Meeting’s general purpose is to establish an annual operating budget and to consider amendments or revisions to town bylaws or policies (including the management of finances).

Would you like to know your town meeting members?

Be the first to comment on "October Town Meeting: 8 articles, 8 yes votes"