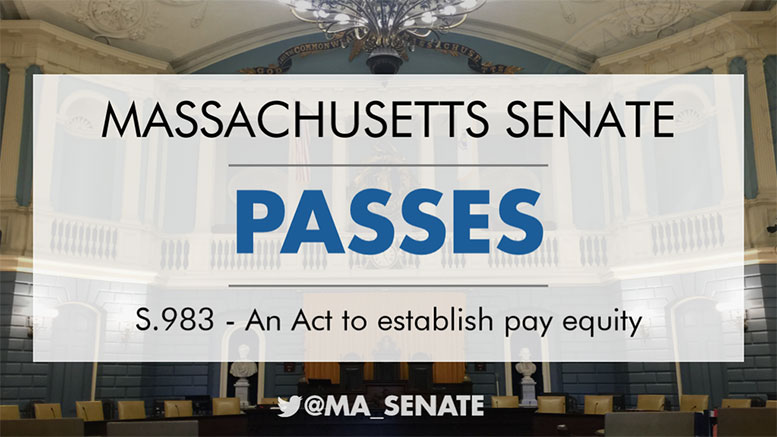 BOSTON –Senator Brian A. Joyce (D-Milton) announced that, by a unanimous vote, the State Senate passed legislation today to strengthen the Massachusetts Equal Pay Act to further close the wage gap between male and female workers in the Commonwealth. The bill seeks to bridge the wage gap by ensuring equal pay for comparable work, establishing pay transparency and requiring fairness in hiring practices.

“The federal Equal Pay Act was signed in 1963. At the time, women earned 59 cents for every dollar a man made. While progress has been made in the past 53 years, women continue to earn less than men in the same positions. Thanks to this legislation, I’m confident we will finally achieve equal pay for equal work in Massachusetts,” said Joyce.

While progress has been made in the past 53 years, women continue to earn less than men in the same positions. -Brian Joyce

The bill strengthens current law by defining the term “comparable work” within the Massachusetts Equal Pay Act to ensure comparable work is truly comparable in pay. Variations in pay may exist for comparable work if the difference is based on a bona fide merit system, a system that measures earnings based on production or sales, differences based on geographic location or education, training or experience reasonably related to the particular job. The bill also prohibits an employer from reducing the pay of any employee in order to comply with the Massachusetts Equal Pay Act.

The bill encourages pay transparency, while ensuring that salary history is not used against employees when negotiating for a new job. The bill prohibits employers from banning employees from discussing or disclosing information about their own wages or other employees’ wages. The bill also prohibits employers from screening prospective employees based on previous wages or salary history or requesting this information in the interview process.

The bill prohibits retaliation against an employee who opposes any act in violation of the Massachusetts Equal Pay Act, files a complaint or participates in an investigation or discusses wages with another employee.

In addition, the bill includes several updates to the way a pay equity claim may be filed to make it easier for individuals to make timely claims and ease administratative barriers to filing a pay

The bill now goes to the House of Representatives for consideration.

-From the Office of State Senator Brian A. Joyce