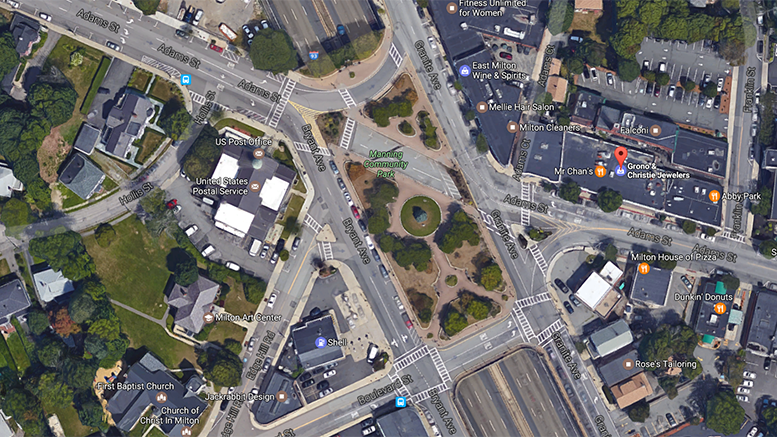 Parking lot on I-93 Park revisited

Thoughts on the proposed parking lot on the Adams Street overpass

The quest for a parking lot on the public landscaped park, over the East Milton I-93 “Canyon”, was discussed at last week’s Selectmen’s Meeting.

In 1955, the Southeast Expressway was built through historic East Milton Square. The “ugly” I-93 “canyon” was created. 24 homes and six businesses were taken. The East Milton playground on Squantum Street was destroyed.

The area’s historic significance is the intersection of the nation’s first highway (Boston to Plymouth) with the first (1826 Granite) railroad. East Milton is registered as a National Historic Place “Railroad Village,” as has the alignment of the Granite Railroad, at the Quincy Incline.

The community was outraged over the “canyon.” The project even dead ended the senior selectmen’s street.

Finally, Congressman Brian Donnelly obtained a demonstration grant for a park and landscaped deck over the “canyon,” similar to one he discovered in Seattle. In 1993, the Mass. DPW commissioners and Selectmen Katherine Dunphy, Joseph McEttrick and John Shields signed a binding agreement to accept and maintain this park, as mitigation for the harm done. The Federal Highway Administration (FHWA) paid about $7 million for the project.

Last week, the selectmen heard a renewed pitch for a parking lot, which others view as “ugly” yet again.

A review of the records discloses that neither the selectmen, the consultant nor the traffic study committee were aware of the 1963 “park” agreement as of the June 2011 report.

Business interests including Fitness Unlimited have long been pressuring the Town for parking spaces on the park. The problems are 1.) the Agreement, 2.) the degradation of East Milton’s environment, 3.) the Article 97 Park Protection of the state constitution, 4. ) the Federal Transportation Act protecting parks, 5.) the selectmen’s parking consultant recommended against the parking lot, 6.) that 25 spaces are trivial in the context of 995 current on & off street, public and private existing spaces in the square 7.) that the selectmen have yet to act on the consultant’s recommendation for parking management, parking enforcement and way-finding, and the police chief and Traffic Commission’s recommendation for parking management have been ignored.

Five years ago, a previous Milton Board of Selectmen closed the Adams Street Bridge with a promise to loam and landscape that pavement to add to the park. Four parking spaces were then lost. Dirt berms, orange cones and barricades were the Adams Street bridge blight delivered to the people of East Milton. (Editor’s note: see October 2016 survey results of Milton residents’ opinion of the closed overpass.)

The already bizarre traffic pattern was further contorted to create the roundabout suggested by Fitness Unlimited with the parking lot on the park goal. Town Meeting has voted down numerous off street parking acquisition requests. In East Milton, business with client parking needs purchase and maintain off street or shared parking. These the include three fine dining restaurants, the banks, funeral homes, the Milton flower shop, Traverse Insurance, Dunkin Donuts, and The Milton Marketplace to name a few.

Money Magazine, weeks before the Adams Street bridge was closed and left bare, named our Town of Milton as the 2nd best place to live in the Nation. They specifically cited our parks and open space.

The overpass proposal is to rip out the landscaped park between the Shell Station and the Fire Station, including the knee walls, and install an “ugly” parking lot. This is an affront to the Cunningham Park, Edgehill Road and Governors Road neighborhood who approach the Square from this direction.

Makes one wonder who is steering the ship?

Select Board to discuss 40B Applications at upcoming meetings