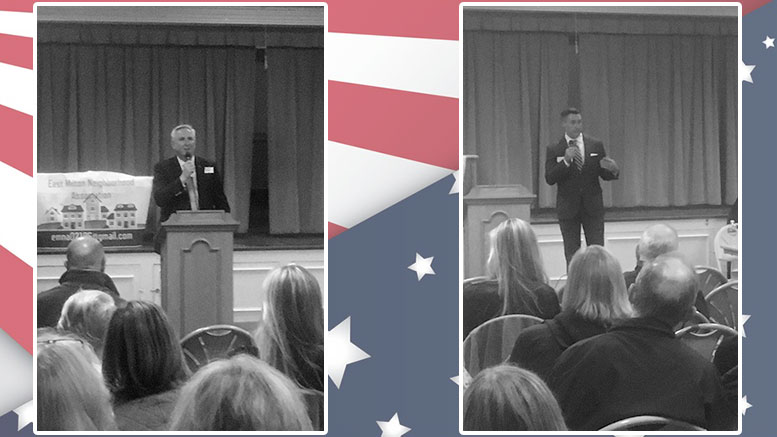 Selectmen hopefuls Richard Wells and Tony Farrington addressed those in attendance (candidate Steven Fruzzetti did not attend). There is one three-year term seat available, as current Board of Selectmen member Tom Hurley will not seek re-election.

Richard Wells emphasized his experience, education and connection to the town in noting that he attended Milton High School, has a master’s degree in Criminal Justice, and has served as a Milton Police officer as well as Chief of Police of Milton. He served on the Homeland Security Council, and is a board member for the Copeland Foundation, which donates regularly to many causes in Milton. He quoted School Committee chair LeRoy Walker with his reason for running: “What we have in Milton is precious.” Wells said he is committed to resolving and completing the East Milton Square deck project, and is excited about the new technology that the timed lights will offer in resolving traffic issues in the square. He also spoke about the opioid epidemic, stating that “Milton is not immune to the opioid problem.” He wants to protect Milton’s children by starting a youth advisory task force involving parents, kids, officials, and community members in order to pro-actively address the issue. With respect to the new air traffic pollution and noise problem, Wells would like to use his relationships and partnerships garnered during his police career with officials both in and outside of Milton in order to address the problem as a broader group. He also mentioned the fire space needs and school space needs as being top priorities. Wells supports the 2017 budget override, stating that “nobody likes taxes” but also mentioning his efficiency and success at maintaining a balanced budget as Chief of Police. When asked about moving from a three person to a five person Board of Selectmen, Wells noted the thought and hard work that the town’s government affairs committee put into recommending in favor of the five-person board as most town in the Commonwealth have, but that the ultimate decision lies with Milton’s residents.

Tony Farrington also emphasized his Milton roots and background stating that he was also raised in Milton, attended Boston College High School, Boston College and Suffolk University Law School, and hopes to one day raise a family here. He said he is motivated by “a strong desire to serve” and “would offer a balanced perspective” to the Milton Board of Selectmen. Farrington supports the 2017 override, but would like Milton to “reach peak efficiency” so that “overrides aren’t the only way to keep Milton afloat.” He said he understands that some residents are concerned about the immediate expense and others worry about future overrides, but that there would be too many sacrifices without the 2017 override, and that Milton faces too many financial hardships right now without the extra funds. Farrington discussed seeking more outside funding from grants and promoting efficiencies to produce costs savings. He would like to see a smart government with process improvement through efficiencies, having fewer studies and fewer committees, and as much “low-cost, no-cost improvement” as possible. He would also like to see Adams Street reopened to get traffic moving. Farrington called himself a “team player that works best as part of a group” and said he’d like to see more fresh faces and fresh perspectives in Milton. When asked about moving from a three person to a five person Board of Selectmen, Farrington advocated strongly for a three person board.

Candidates for the one contested Park Commissioner position also spoke.  Candidate Scott MacKay cited his primary reason for an election run as being “for the kids.” A chief financial officer of a unionized electrical contracting business, MacKay is a strong supporter of consolidation in order to avoid duplication of effort. He proposes streamlining processes in order to efficiently save money, shifting oversight and management of volunteers to the new Town administrator, and moving town maintenance under one department. He stated this would allow the Park Commissioners to focus on programming. MacKay stated that he would also like to see an expansion of recreational programs overall and an increase in recreational programs for toddlers and pre-schoolers as well as senior citizens which he has identified as underserved program demographics.

The two candidates for one available Planning Board seat addressed housing and development matters in the town. Candidate Ed Duffy, described himself as an “endangered species,” said he was born in Cunningham Park, which at the time was Milton’s hospital location. He has twelve years experience as a planning board member, and also worked in the planning department for thirty-five years. Duffy stated, “I know more about this town than anyone in this room.”

Denny Swenson, candidate for Planning Board, described her love for the historical nature of Milton, as well as it’s beautiful natural landscapes. A board member for the Friends of the Blue Hills, she also founded the Friends of Hemenway Woods and the Milton Neighborhood Coalition. She said the “board makes very important decisions in this town” and she thinks that all neighborhoods should have a voice in the process. Swenson said she sees the ethics and the transparency of the planning process as being key.

Library Trustee hopefuls in that contested race were also in attendance. There are currently three, three-year term seats available. Incumbent candidate Kristine Hodlin cited her experience as a Milton Public Library trustee, treasurer, and chair, experience on the warrant committee, and Town Meeting member experience, as being essential to the position. A 33 year Milton resident, Hodlin works for State Street, and wants “to offer more time to make Milton a better place.

Sindu Meier, candidate for Library Trustee, is an architect who worked on the Boston Public Library and East Boston branch, and has also served on a long-term planning committee, so is familiar with such processes. She has three children who enjoy the library immensely, and she’d like to help the library move from simply a book repository to a place that serves patrons.

John Folcarelli has lived in Milton for over 30 years, and is an incumbent library trustee candidate. He has been a Town Meeting member since 2001, and also also served on the Warrant Committee. Folcarelli spoke about the new long-range plan, and the importance of trustees seeing that the plan is implemented effectively. He helped work on the library turnaround, and talked about the importance of finding better parking solutions.

Sheryl Fleitman, a town meeting member in precinct one, President of the Tucker Neighborhood Association and co-chair of BOS Fair Skies, is also a library trustee candidate. Fleitman says she offers a fresh voice and a new perspective and emphasized that she hails from the town’s most diverse precinct. She wants to research how to get more parking for the library and also sees the trustee opportunity as “a fun way to get involved” with the library. Fleitman attended Tucker Elementary School and would like to see the Kidder Library repurposed for something that benefits the town.

The two candidates for one Board of Health position this election cycle also presented at the forum. Westyn Branch-Elliman, an infectious disease physician, is a candidate for the Milton Board of Health. Branch-Elliman said she offers a “broad view of health” with respect to ticks, mosquitoes, plane pollution and the stress associated with it, the East Milton rodent problem, and the opioid epidemic. When asked about what she would do to help alleviate the plane pollution and noise in Milton due to the new NextGen satellite technology, she said she’d like the Board of Health to put together a publication about cardiovascular health and the impacts of stress due to plane pollution and noise, in an effort to argue that “one town should not bear the brunt” of 40% of all arrivals into Logan Airport.

Roxanne Musto is an incumbent candidate for the Milton Board of Health and has been involved with the Board of Health since 2005. Musto is a practicing nurse practitioner, and cares mainly for the geriatric population. She grew up in Milton, and has volunteered in many capacities including the Milton Foundation for Education, the Town of Milton volunteer medical core, the Warrant Committee, and the Tax Exempt Steering Committee. She has been a precinct 5 Town Meeting Member since 2001. Musto said “it is important to be involved in your community and to give back.”

Candidate Ada Rosmarin, one of the two candidates for the two School Committee seats, addressed those at the forum. Rosmarin stated that she has lived in Milton since 1988, and has been a Town Meeting member for over two decades and has also served on the PTO. Rosmarin’s priorities are early childcare education, which she sees as an important and necessary foundation for all children, long-term strategic planning, which is essential to getting a handle on the increased class size and increased enrollment due to young families moving into town, and educating the whole child. Betty White, the other candidate for School Committee, sent her regrets that she could not attend the forum.

East Milton Town Meeting candidates also spoke at the forum. Candidates Ruth Heiden, Jeanne Burns, and George Lambert, from precinct six, and Peter Dunn, Paul Doherty, Arthur Doyle, Joseph Reardon, Kim Conroy, and David Johnson, from precinct 7, each introduced themselves and spoke for one minute about their reasons for running.

The forum closed with a thanks and recognition from Steve Rines, the new president of the East Milton Neighborhood Association to Cindy Christiansen, EMNA founder and president from 2015-2017. The election is April 25th.

VOTE Today, June 20th: Milton Override is on the ballot