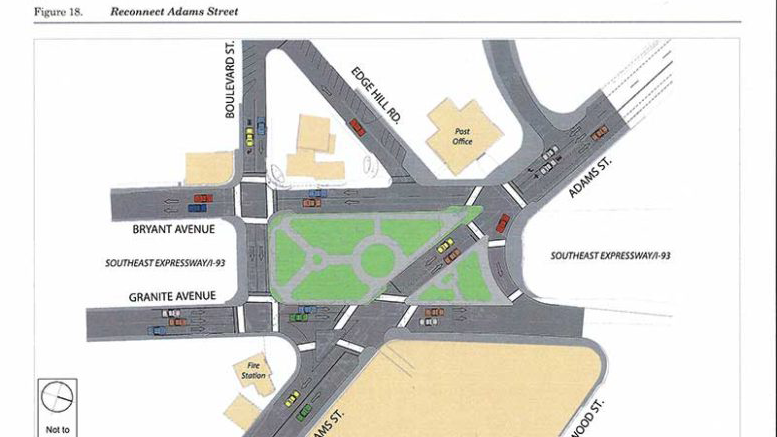 The owner of Fitness Unlimited recently misrepresented my long-time support for East Milton Square improvements. (See: Opinion: Should The Town Of Milton Re-Open Adams Street Over The East Milton Deck?)

While Milton Town Administrator, I assisted the selectmen in presenting articles to acquire land for East Milton municipal parking, which were lamentably rejected by several Town Meetings. These were at the former Carleton Ford site, on a deck proposed by the Sheldons between the Blue Hill Bank building and Bassett Street, and at 4 Franklin St.

I am foursquare in support of the traffic light upgrades, shorter cross walks, bicycle and pedestrian safety, signage, landscaping and park upgrades which have been designed, but delayed by the quest for a parking lot on the deck.

The problem is that the Weisner Plan to put a 25 to 55 space parking lot on the 400ft. by 300ft deck/park has been ruled illegal by both the federal and state. Variations with that intent are also unlawful.  They ran afoul of parkland protection laws of the state (Article 97) and federal (Section 4(f).

Unfortunately, in 2010 a committee sought to convert the park over the “canyon” to a parking lot proceeded without knowing that in 1993 the Selectmen (J. McEttrick, K. Dunphy and J. Shields) signed a License Agreement with Federal Highway Administration and State Public Works Commission certifying that it was a park and pledging to maintain it.

The FHWA administration now has $2.2 million in earmarks for East Milton Square improvements thanks to Congressman Lynch. A state earmark of one million dollars may also be available. The FHWA has been dismayed at the Town’s self-imposed delays. Howard Stein Hudson in their 2011 consulting report recommended against the parking lot on the deck proposal.

A “freeze” proposed by the Fitness Unlimited owner and further delays will not serve the East Milton community or businesses. Haven’t we learned that by the seven years of misunderstandings and inactivity? Let us trust that the new Board of Selectmen will move the improvement program ahead expeditiously and wisely.

Fitness Unlimited provides a valuable service to the community and has managed well under the existing conditions. It might be better if it could provide off street client parking.

I trust the Fitness Unlimited owner will carefully examine the parking benefits of the various Adams Street bridge reopening options. The FHWA is anxious to work with interested parties. I have shared my thoughts with the current Chamber of Commerce president, Darryl Elliott. The Selectmen may hold a public hearing soon, to get community input.

When the Southeast Expressway opened, the Town was divided by an ugly canyon. Town Meeting created a mitigation committee. Businessmen were on it including Harry Osborne and David Gallery. Terry McGovern was the Chamber President. The Committee worked for several years and finally, Congressman Donnelly secured funding.

The result was a deck over the “canyon” with a passive landscaped park which all agreed was the proper antidote to the ugly preexisting condition. Numerous houses and buildings had been lost or displaced by the Expressway and the seven acre East Milton Playground on Squantum Street was sacrificed. Today thousands enjoy the landscaped park each day as they pass by.

Be the first to comment on "Opinion: Objection to the East Milton deck project “freeze”"