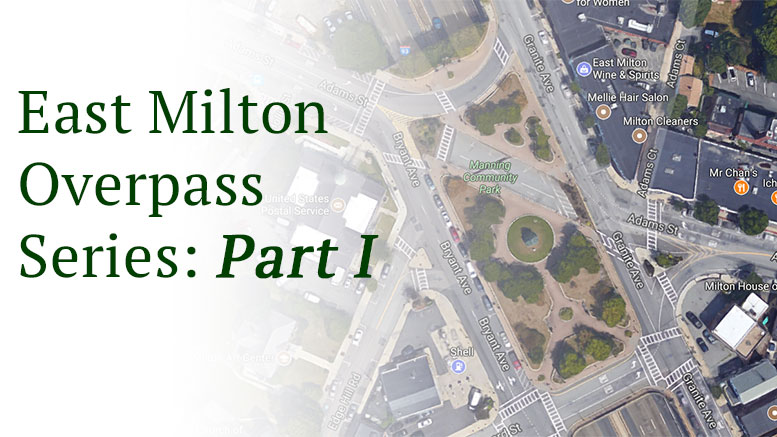 This is part one of a three-part series, contributed by Milton resident, John Cronin.

East Milton’s landscaped park, which caps the I-93 “canyon,” will be the subject of the Milton Board of Selectmen’s public hearing on Wednesday, September 13, 2017 at 7:00 p.m. in the Council on Aging Building at 10 Walnut Street.

MassDOT’s, engineer Howard Stein Hudson (HSH) had originally designed a 25-space parking lot to be located on the landscaped park/deck between the Shell station and the Fire station in East Milton Square. But a parking lot has now been prohibited by the state and federal governments, which financed the park/deck originally. Notably, that parking lot design that would have yielded a net of 14 spaces, as four were lost on Adams Street and seven on Bryant Avenue, in the proposed design.

Both the State and Federal governments have laws prohibiting building parking lots on dedicated park lands.

Both the State and Federal governments have laws prohibiting building parking lots on dedicated park lands. The February 2017 rulings were received from the state Secretary of Environmental Affairs and the Federal Highway Administrator. Cited were Article 97 of the state Constitution and Section 4(f) of the Federal Highway Transportation Act.

Without a parking lot, the consultants will present their final designs. Decisions may have been previously made by Milton’s Board of Selectmen regarding reopening the Adams Street bridge. Public input may not be accepted as the Roundabout and traffic light designs have been completed. The roundabout design eliminates an intersection, simplifies traffic signal design and may move traffic more efficiently. Traffic calming may occur. Plus, the design work apparently has been finished, using the existing roundabout as a blueprint.

Also to consider is the future of the little landscaped park. Permanent closing of the Adams Street bridge allows the green space and landscaping to be expanded. Safer bicycle and pedestrian routes are facilitated. Surprisingly, MassDOT had proposed eliminating planters which sustain the desired shrubs and trees. MassDOT called this “activating” the park for “food trucks, farmers markets, public events to be determined, perhaps flea markets, public assemblies and concerts. These uses may have been conjured up by the MassDOT designers to justify the now prohibited parking lot. As one BCAC member, said “No one is going here for a picnic” or to sit for prolonged periods.

For twenty years, the existing passive park has been enjoyed by thousands of pedestrians, bicyclists and motorists passing by each day, over one of the Nation’s busiest Interstates. But with an atmosphere laden with exhaust fumes, few linger.

Be the first to comment on "What is the future of East Milton’s Deck? (Part 1 of 3)"