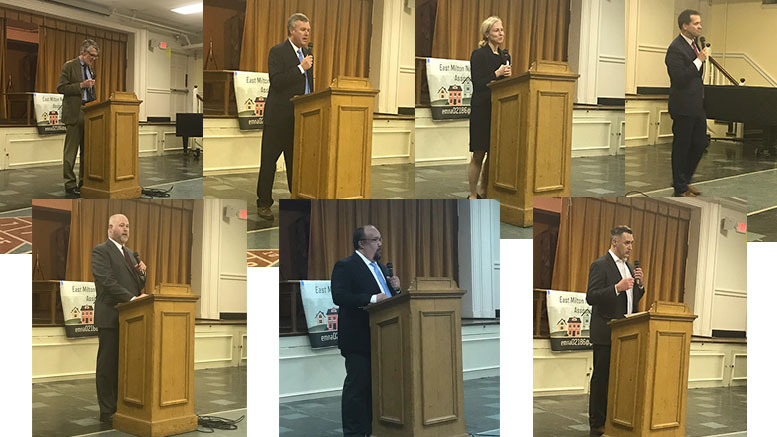 A handful of candidates appeared before a small crowd during the East Milton Neighborhood Association Candidate Forum on April 12. Speaking at the East Congregational Church, candidates for Board of Selectmen, Planning Board, and Park Commissioner laid out their respective cases for why residents should vote for them.

While the event did compete with both the Red Sox and Bruins games, it should be noted that many candidates did not attend. No one running for School Committee, Library Trustee, Cemetery Trustee, or the other uncontested races spoke to the voters. That very much seems like a missed opportunity for the residents of East Milton, traditionally the districts with the highest voter turn out, to know what these candidates intend in the upcoming term.

Melinda Collins, 2018 Candidate for Board of Selectmen

Tony Farrington, 2018 Candidate for Board of Selectmen

Alexander Whiteside, 2018 Candidate for Planning Board

Rich Boehler, 2018 Candidate for Planning Board

Mike Zullas, 2018 Candidate for Board of Selectmen

Richard Boehler and Alexander Whiteside, both running for the one Planning Board seat, spoke first. Whiteside emphasized his experience serving as current chair of the Planning Board and his training as a lawyer. He said that the town has changed much over the years and that future development needs thoughtful planning. Boehler noted that East Milton while a business district is also a vibrant residential area. He pointed out that East Milton does not have much representation, and that residents’ concerns need to be heeded when considering any future development.

The Parks Commissioner seat has Robert Kelly seeking reelection versus Scott McKay wanting to try his hand at the role. Kelly pointed out all the programs the parks department runs, including a skiing/snowboarding program for kids this past winter and the summer camp, among the almost two dozen recreational programs. McKay emphasized that the parks department is independent from both the Board of Selectmen and Town Administrator. He wants to bring more transparency and accountability to the department, noting that the recent improvements to the park playgrounds were not done by the town but through private, independent fund raising and organizing. Both candidates saw the need to a youth center in town.

All three candidates for the Board of Selectmen came to ask for voter support. Melinda Collins told the audience she brought much experience from her roles in business leadership and her work with affordable housing. Tony Farrington told voters he remains committed to serving the town, and has spent much time studying the pressing issues. Michael Zullas recounted his long experience serving the town, including on the Warrant Committee and School Committee. There are three open seats for selectmen as the board is transitioning to five members. The election will determine who is voted a three, two, or one year term.

Throughout the event all the candidates took questions from the audience. The overriding topic was development in the town. Almost all candidates sided with the neighborhoods when it comes to any building. Some where more emphatic in opposing a project if the neighbors were opposed, but most stated that the town does need growth. A theme running through the answers was that people need to work together to shape the growth of Milton. Opposition to any development leads to using 40b regulations to sidestep local resistance. As one candidate notes, forcing the issue where a developer feels the need to go 40b results in a project nobody really wants but is built anyway. Both the Planning Board and Board of Selectmen candidates offered views on how to bring all sides together to work through difficult issues though means such as overlay districts.

A theme running through the answers was that people need to work together to shape the growth of Milton.

The election is April 24. Sample ballots and list of polling stations are available at the Town Clerk’s page of the town’s website.

2018 Election Update: David Burnes withdraws from Board of Selectmen race