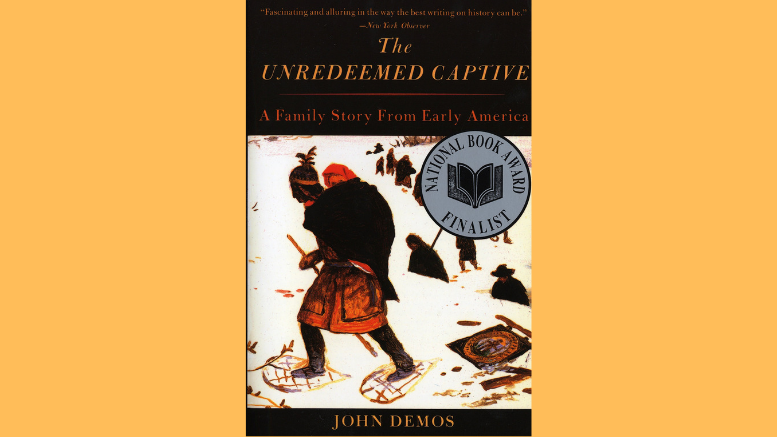 Book choice to be Unredeemed Captive by John Demos

On Wednesday, December 5th at 7:00 p.m. Library Director Will Adamczyk will hold his “Local History Book Group” and the title to be read in advance is Unredeemed Captive by John Demos (Alfred Knopf, c1994). This book was nominated for the National Book Award and was winner of the Francis Parkman Prize. The setting for this haunting and well researched work of history is colonial Massachusetts, where English Puritans first endeavoured to “civilize” a “savage” native populace. There, in February 1704, a French and Indian war party descended on the village of Deerfield, abducting a Puritan minister and his children. Although John Williams was eventually released, his daughter horrified the family by staying with her captors and marrying a Mohawk husband. Out of this incident, The Bancroft- Prize-winning historian John Demos has constructed a gripping narrative that opens a window into North America where English, French, and Native Americans faced one another across gulfs of culture and belief, and sometimes crossed over. John Demos is the Samuel Knight Professor Emeritus of History at Yale University. He lives in Tyringham, MA and has won several prizes for his writing, including for his work called Entertaining Satan. Please come join Will for this fascinating educational chat.

For more information about events:

All of these events are kindly sponsored by the Friends of the Milton Public Library and are free and open to the public. They will be held in the Keys Community Room unless otherwise noted here, and we are hoping to see you all at the library in December for an enjoyable program! For more information about any of them, go to our website which is www.miltonlibrary.org or call Librarian Jean Hlady at the Reference desk at 617-698-5757, x. 3.