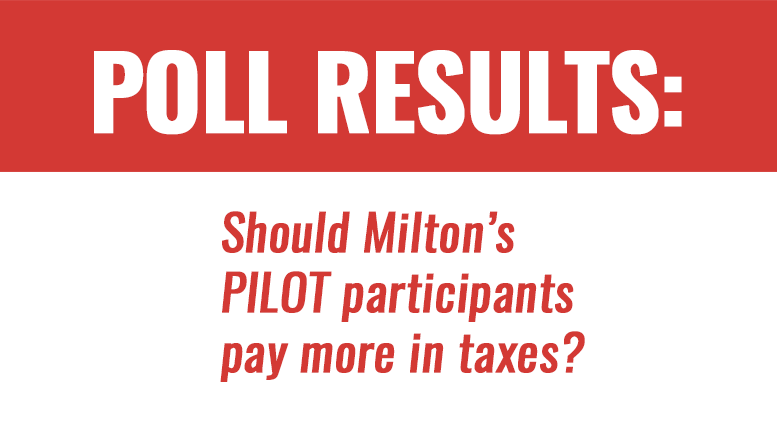 No: PILOT programs should not pay more in taxes: 15%

Here’s what Milton Neighbors had to say:

“There is no doubt that they should pay more in taxes. It is unconscionable that we have to even discuss this question.”

“The should be a review and calculation based on the use of town services including EVERY TOWN DEPARTMENT right down to the penny.”

“You can’t only tax the non profits you don’t like. I suspect requiring PILOT payments would devastate many of our smaller houses of worship and would also have a negative impact on the schools and hospital, which employ many Milton residents.”

“… and I would add churches and synagogues to that list.”

“I would leave the hospital out, health care needs to be accessible to all and I feel institutions such as a hospital should be exempt; however the other two institutions should pay.”

“They use all the services …police, fire, EMTs ….so they should START to pay NOW !!!”

“Build more commercial property, this is all Milton’s fault, not the non-profits.”

“They should contribute more than they do. Probably not the full amount.”

“They should pay considerably more, but not the standard business or residential rates.”

“It would be nice if they did but currently they don’t have to. What would be nice is not wasting money and spending every dime in the budget causing chaos when funding doesn’t come through.”

Respondents are not randomly selected, but select themselves to vote on a specific question or set of questions. In addition, while Miltonscene.com online polls are designed to allow only one vote per user, technically savvy users may find ways around this limitation.

For these reasons, the polls are not presented as scientific surveys or as representative of the opinion of the general population of our readership areas, region or nation.

Milton Neighbors: Which presidential candidate has your vote?

Be the first to comment on "POLL RESULTS: Should Milton’s PILOT participants pay more in taxes?"