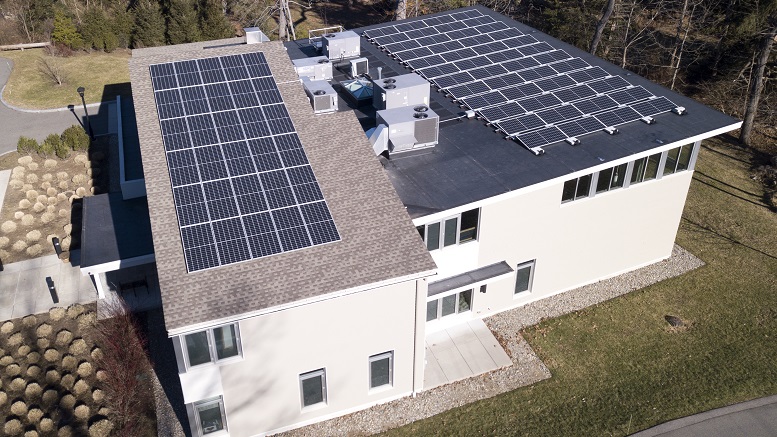 Congregation Beth Shalom of the Blue Hills enters the new year with a new look and a new source of electrical energy, after installing 78 roof-mounted solar panels at its home on Shoolman Way in Milton, which are expected to generate approximately 29,000 kilowatt-hours (KWh) of electricity per year.

The project came to fruition after years of discussion and research by the synagogue.  It was installed during the period from October to December, 2020 by Sunbug Solar, with project assistance from Resonant Energy of Boston.  It should supply about 95% of the synagogue’s electrical usage when it is operating in normal (non-pandemic) mode.

A grant from the Left Coast Fund assisted with financing of the project, through the Solar Moonshot Program managed by Hammond Climate Solutions of San Diego.  Non-profits interested in this program can get information at the Solar Moonshot website (https://www.hammondclimatesolutions.com/solar-moonshot).

Synagogue president Paul Cooperstein stated, “We appreciate the assistance provided by Tara Kelly Hammond of Hammond Climate Solutions and Kathleen Doyle of FireFlower Alternative Energy of Boston.  I also express my thanks to congregants Jay Balaban, Deborah Felton, Norm Berk and Robert Rosofsky for their participation.”

As part of the Jewish ethic of tikkun olam (translation: “repair the world”), the solar array will allow the synagogue to use the sun, a sustainable and natural energy source, instead of poisonous and damaging fossil fuels for electricity generation.  The projected energy output also has an annual carbon-dioxide reduction equivalent of 30 acres of forest.

Resonant Energy specializes in solar arrays for houses of worship, non-profits, affordable housing providers, companies and homeowners in Massachusetts, New York City and Long Island.  It has been growing steadily since its founding in Dorchester in 2016.

Congregation Beth Shalom of the Blue Hills is an independent synagogue that welcomes all members of the Jewish faith including LGBTQ+, interfaith couples, and all singles and families interested in affiliating with a Jewish community.  For information about membership or programs, call the synagogue office at 617-698-3394, email [email protected] or visit www.BethShalomBlueHills.org.