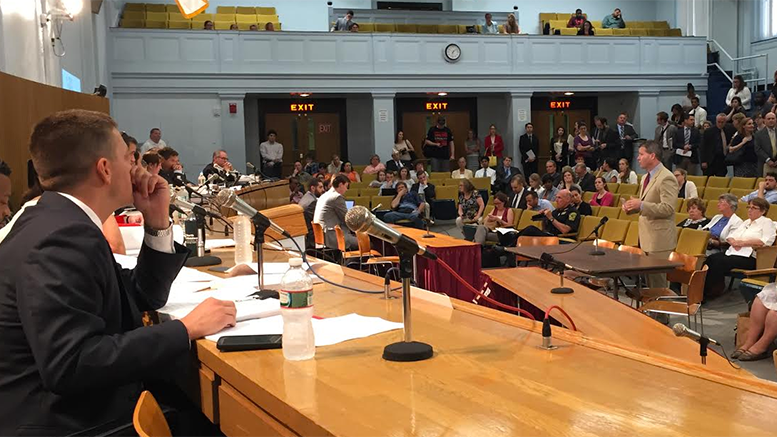 The intent of this legislation is to, decisively, enhance the criminal penalties for individuals who, purposely, impede the flow of traffic on state highways.

The intent of this legislation is to, decisively, enhance the criminal penalties for individuals who, purposely, impede the flow of traffic on state highways. Touting this legislation, Representative Timilty offered this testimony before the Joint Committee on the Judiciary. The audience was comprised of Committee members, advocates, and members of the general public.

Specifically, House Bill H3453, which has been both proposed and filed by Representative Timilty, reads: “Whoever commits or attempts to commit any act to obstruct, block, detain or render passage impossible, unsafe or unreasonably difficult the normal movement of traffic, commerce or any emergency medical services on a limited access or express state highway in any manner dangerous to the general public shall be punished by imprisonment in the state prison for not more than 10 years.”

Timilty filed this legislation in response to two incidents that occurred on January 15, 2015. On that day a group of 29 protesters exited vans on I-93 in Milton and Medford, with the sole intention of obstructing traffic into the City of Boston, during the height of the morning commute.

Following the hearing, Representative Timilty stated, “As a direct result of these reckless and dangerous protests, thousands of hard-working citizens of the Commonwealth were unable to reach their places of employment. Furthermore, citizens who are paid on an hourly basis sustained the loss of well over one hour’s worth of wages.  Moreover, the actions of these protesters endangered the lives of countless citizens of the Commonwealth. It is extremely fortunate that a fatality did not occur. With this legislative proposal, it is my sole purpose to provide a deterrent for those who would obstruct state highways in the name of protest.”

From the Office of State Representative Walter F. Timilty

3 Comments on "Representative Walter F. Timilty Testifies on Behalf of his Bill, House Bill H3453, An Act Prohibiting the Obstruction of State Highways"