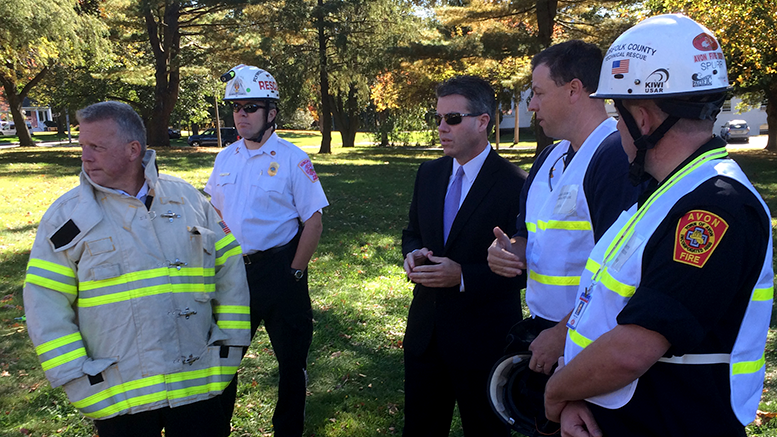 On Thursday, October 15th, Representative Walter F. Timilty, at the invitation of Milton Fire Chief Jack Grant, attended a trench-rescue drill at Milton Fire Headquarters. The exercise was conducted by the Norfolk County Technical Rescue Team, which is comprised of firefighters from Norfolk County, better preparing the rescue team in the event of a trench collapse in the region.

On January 16th of 2015, Rep. Timilty filed House Bill 3484, An Act relative to the creation of the Commonwealth Technical Rescue Regions and Coordinating Council. Timilty’s bill, if, ultimately, enacted by the Massachusetts State Legislature and signed into law by Governor Baker, will marshal resources from within the Fire Service of the Commonwealth, creating and sustaining technical rescue-teams, given that only a handful of Fire Departments in the Commonwealth have the ability to establish, equip, and maintain such units.

“Thank you to the Norfolk County Technical Rescue Team and the Milton Fire Department for inviting me to observe the trench rescue fire drill, at Milton Fire Headquarters. It was an honor to work with the Fire Chiefs Association of Massachusetts, to file my bill, House Bill 3484, An Act relative to the creation of the Commonwealth Technical Rescue Regions and Coordinating Council. Special thanks to Milton Fire Chief Jack Grant, LT. Chris Madden, Firefighter Tom Cicerone, and Deputy Chief Steve Murphy of Hingham. Moreover, thank you to the men and women that comprise our outstanding Fire Service, across the Commonwealth.”

From the Office of State Representative Walter F. Timilty

Milton Fire Station projects to be discussed in webinar Feb. 11

Be the first to comment on "Rep. Timilty takes part in trench-rescue drill at Milton Fire Headquarters"