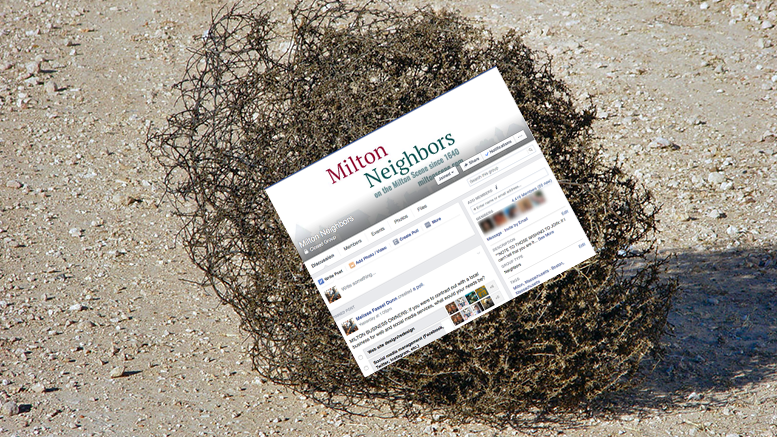 Milton Neighbors activity at a standstill

Once popular, the Milton Neighbors Facebook group has recently become like an internet ghost town. At its peak, the group had over 4,400 members who would post and ask about local news, calendar, Milton Public Schools questions, and advice.

However, recently, activity has dwindled to a near halt. The latest lively debate, which touched on Milton’s recently funded full day kindergarten program, mysteriously dwindled, the last comment being, “I wholeheartedly agree with everything everyone on this thread has said.”

Even the Ice House property discussion, once a hot button topic for residents, has had no commentary for several weeks. “It’s almost like nobody has an opinion anymore,” said Milton resident, “S.”, who wished to have his  name withheld.

It seems as though since much lauded commercial development, including the new drive-through Chick-Fil-A, Tobacco-Lottery-Liquors-R US, and the marijuana dispensary/Dorito’s factory, has increased and the residential tax rate is now only .0001%, there is simply nothing to talk about.

Traffic has also decreased since $13.00 toll stations were put in place at all Milton entry points. Commuters now avoid cutting through Milton, and since Milton residents are known for being the best drivers in the entire country, all speed limits and traffic signs are now obeyed nearly all the time, according to Milton’s police chief, whose name has slipped the author.

And since Milton Neighbors were finally able to have action taken on the airplane noise and pollution problem, the complaints about incessant planes over the town have also stopped. Encouraged by Congressmen Stephen Lynch, the FAA and MassPort quickly resolved the air traffic problem and were happy to ensure that Milton residents’ safety, health, and sanity remained intact. NextGen targeted navigation has been completely abandoned, and plane traffic entering Logan airport is now distributed evenly across Boston’s surrounding areas, no longer torturing the people beneath the planes. Heart disease, asthma, and cancer rates in town have also plummeted.

One would think there would still be issues to discuss, but a Milton resident, know only as “D,” attributes the Milton Neighbors standstill to a general loss of interest in discussion. “I haven’t been on Facebook in months. I just don’t have anything to say about anything at all anymore,” she said.

if you believe all of that, I have a blocked-off street over a highway to sell you.

Got land? Want to develop it? Call Kelly Land Consultants for a free consultation

What are we discussing? Top Milton Neighbors posts – January 2021