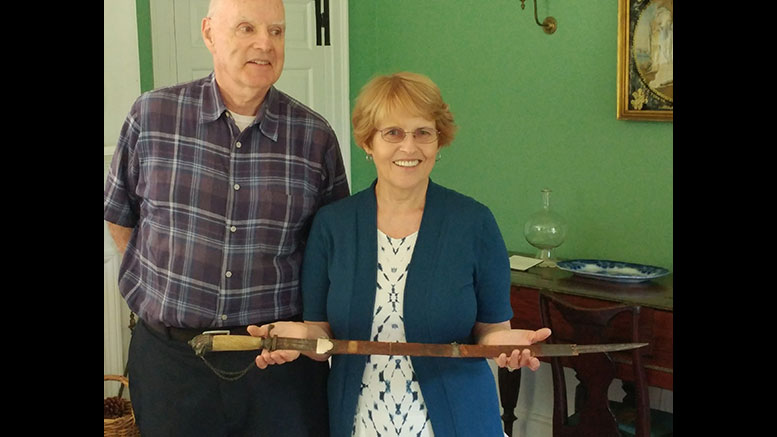 The Milton Historical Society honored to receive the sword, scabbard and belt of Captain Daniel Vose. 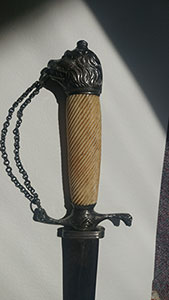 Daniel Vose, born 1741, was given “in token of his birthright” his father’s silver hilted sword.  His father, Captain Thomas Vose, died March 2, 1760; He led his troops to the relief of Fort William Henry in 1757.  The mouth of the scabbard (where the sword blade is inserted) has silver fitting inscribed “Daniel Vose”. The sword pommel depicts a lion’s head mounted above a carved bone grip which is protected by a ram’s head guard decorated by military symbols (helmet, drum, hatchet, banners, etc).  The sword and scabbard have been cleaned and treated by an ‘object conservator’ and will be on display at the September10th Open House and all future happenings at the Suffolk Resolves House.

The donation was made by John and Rosalie Godfrey of North Carolina. Rosalie is a direct line descendant of Daniel and Rachel (Smith) Vose through their daughter Elizabeth who married Edmund Baker.

Rosalie explained that “for many years the Daniel Vose sword was secreted away in a closet under the staircase in the “Dabney Cottage” at York Harbor, the home of my great-great Aunt Nellie. As a child I would occasionally take the sword out from the closet and pretend that I was a pirate.  Little did I guess the history and value of the sword until years later when I became interested in the family genealogy?

I am pleased to donate the sword in memory of Ellyn “Nellie” Lithgow Edwards, as she safeguarded it for more than fourscore years.  Aunt Neillie, who died 25 November 1962, undoubtedly received the sword from her mother, Lydia Bowman Baker, who in turn had acquired the sword from her father Edmund James Baker, grandson of Daniel Vose.  Aunt Nellie was the conservator and preserver of all Baker, Vose, Bowman and Edwards artifacts.

Ellyn “Nellie” LithgowEdwards, born 13 July 1872 at Dorchester MA, was the third daughter of Lydia Bowman Baker and John Hughes Edwards. She never married but invested her time and energy into her family which included four siblings and their off-spring. Her great nephew my father, Charles Henderson, Jr., a resident of Charlottesville and a Virginian by birth, spent his boyhood summers at Dabney Cottage, where he learned to sail. After Aunt Nellie’s death, my father became the owner of the Dabney Cottage and its contents, which included the Daniel Vose sword.

The contents of the Dabney Cottage were distributed by lottery to my father’s five children after he passed away in 2016. My sister Elizabeth was able to select the Daniel Vose sword and she gave it to me recognizing my interest in it.

My husband John and I are pleased to know that the sword has come full circle and is home at the Suffolk Resolves House where it can be enjoyed by many, not just wanna be pirates.”

Milton Public Library to host “Songs of the Revolution” program

The Milton Scene will be undergoing site maintenance from 9/18-9/20. We apologize for any technical issues during this time. Dismiss