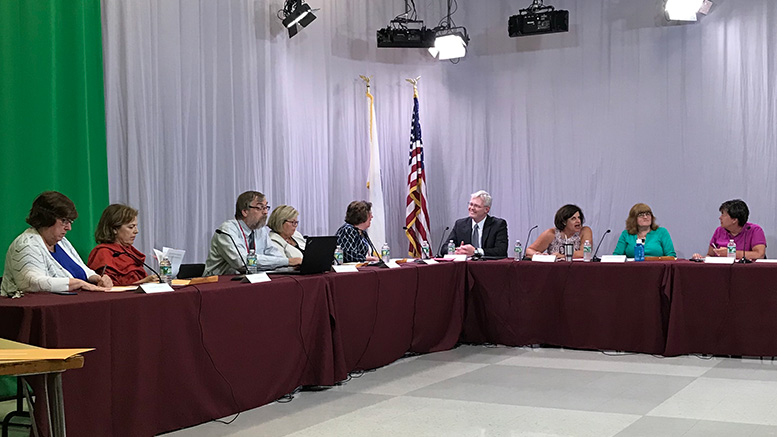 On July 18 the School Committee met at the high school. The main event on the agenda was a discussion about enrollment and space issues in the school system. The committee had previous emailed invitations to parents to join this discussion and approximately twenty people attended.

Chair Kevin Donahue opened the meeting by leading the Pledge of Allegiance. There was no presentation about expected demographics for school enrollment in the next few years. The committee assumed attendees were aware of the scope of the problem. The Milton Public School District is experiencing significant growth in terms of enrollment in the elementary school grades. The 2018-2019 year can accommodate the increase in student numbers by capturing all available space for classroom such as art rooms. However, future increases will need solutions.

The discussion consisted of questions by parents. Possible solutions were mentioned in response. There was frequent talk about the possible need for a new school building. Other options mentioned were the possibility of repurposing spaces such as the Collicot-Cunningham Library into classrooms, or renovating the forth floor of Cunningham Elementary. Several parents were dismayed at the possibility of removing a library from any of the schools. Assistant Superintendent Pavlicek mentioned that previous inquiries about renovating Cunningham Elementary were at least $1.5 million to bring the space up to code for classrooms.

The overcrowding problem affects mostly the elementary schools. In the middle and high schools many students opt to attend other schools such as private schools rather than the public system.

The School Committee needs to devise short term and long term solutions to the demographic pressures on enrollment. When asked to define what short term or long term meant, the committee did not have any definitive timeframes. Donahue did say that possibly building a new elementary school could take at least three years and would therefore be of a more long term solution.

One parent did ask why the committee was addressing the issue now and not earlier. The committee replied that it has been working on this issue for some time. It wishes to engage the community more to find acceptable solutions. No proposal will be ready in time for the October Special Town Meeting, however, whatever proposal is devised will likely need to go to a Town Meeting for approval and funding.

Coronavirus in Milton: An interview with Beth Israel Deaconess Hospital-Milton