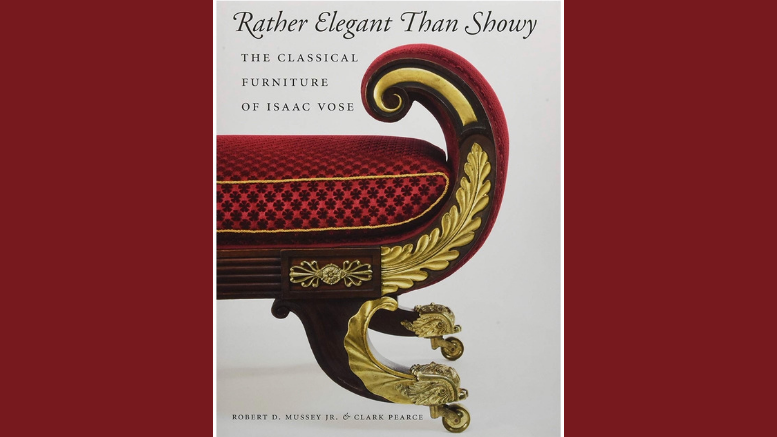 Robert Mussey Jr. to discuss his book he coauthored with Clark Pearse, “Rather Elegant Than Showy: The Classical Furniture of Isaac Vose”

The Milton Historical Society presents local author, furniture conservator and scholar Robert Mussey Jr. to discuss his book he coauthored with Clark Pearse, “Rather Elegant Than Showy: The Classical Furniture of Isaac Vose.” The lecture will be held on Thursday, November 29th, 2018 at 7:00 p.m. at the Keys Conference Room at the Milton Public Library, 476 Canton Ave., Milton, MA. The event is free and open to the public. The library is also a co-sponsor.

Although virtually forgotten for approximately 200 years, Milton Village native Isaac Vose built a substantial business empire in Boston and made furniture for the most prominent Boston families.

“Isaac Vose was well known in his day among style-conscious Bostonians, his name synonymous with furniture of the highest quality and advanced design. His shop, the ‘first on Boston Neck,’ was in a prominent location and served as a familiar landmark in his South End neighborhood. Throughout the 1820s, 1830s, and as late as 1843, some nineteen years after Vose’s death, auction advertisements explicitly cited his name as the maker of select furniture, with the association connoting quality and calculated to increase its sale price. This book gathers in one volume the known works of Vose as well as those attributed to him, and it is gorgeously illustrated throughout,” wrote the authors.

Isaac Vose’s earliest years were spent at his father’s inn at 5 Canton Ave., at the corner of Adams Street in Milton Village. In 1767 Samuel Vose had purchased 5 Canton Ave. where he built the inn which he operated with his brother-in-law Joseph Cummings, who briefly held half interest in the property. Samuel Vose later sold the property to Dr. Samuel Glover who rented it to Henry Vose. For several years Henry Vose operated it as the “Green Dragon Tavern.” Following his success with the ‘Green Dragon,’ Henry Vose moved his tavern operations to Boston.

When the inn was purchased by Moses Whitney it became known as the “Rising Sun.” By 1900 the former tavern had been remodeled by the Gordon family for business use with rooms for rent above. The location was known as Gordon’s Corner for some time. Apartments were still being occupied until shortly before the structure was demolished in 1954. The site then became a funeral home for more than 60 years.

Co-author Clark Pearce advises and brokers art and antiques to a group of clients with far-ranging interests. He helps define and shape their collections in logical ways, building on their particular interests and strengths. His specialty is American furniture, and also works with early silver, ceramics, paintings and other decorative arts from the early 18th century through the 19th century. As an independent scholar he does primary historical research on many topics related to American decorative arts. He has published many articles in scholarly journals and magazines, with a chapter in the upcoming book Four Centuries of Massachusetts Furniture.

Be the first to comment on "Milton Historical Society to present local author, furniture conservator and scholar Robert Mussey Jr."