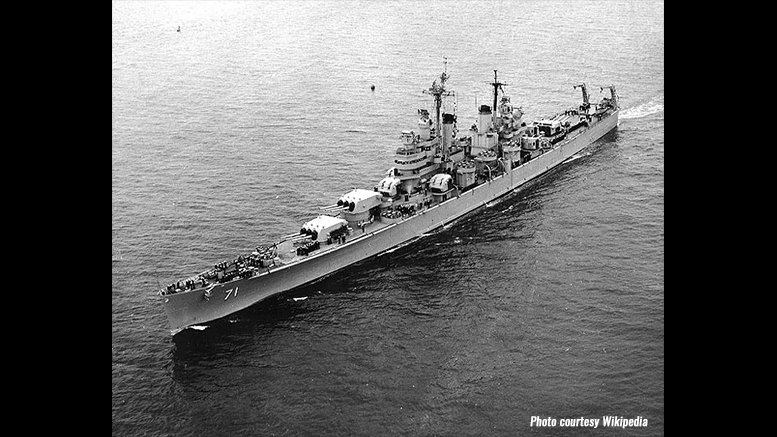 Presentation on the history of the USS QUINCY at the Milton Library to take place Nov. 19.

On Thursday, November 19, avid naval historian Robert Begin will present the history of the USS QUINCY, a heavy cruiser built in the Fore River Shipyard in 1936 and named after the city of Quincy. The event takes place in the Keys Community Room at the Milton Public Library from 7:00 to 8:00 p.m.

Begin will describe the ship’s life from her launching during the Depression years and her peacetime career as she traveled the world and “showed the flag” in the waning days of peace just prior to the outbreak of World War II.

Assigned to the Pacific Fleet in May of 1942, the USS Quincy took part in the first offensive step by America as the Marines landed at Guadalcanal. The Quincy was sunk on August 9, 1942, during the fierce Battle of Savo Island. Begin will portray the ship’s loss through actual interviews with men aboard that night, correspondence with family members who lost kin, and an analysis of the battle from both US and Japanese viewpoints. Come and hear the story of what happened that dark night some 8,000 miles southwest of Milton during the even darker days and nights of 1942, when the outcome of World War II for America was much in doubt.

BONUS:  Come early – View the WWII Poster Exhibit located in the Milton History Room on the 2nd floor of the Milton Public Library.

Be the first to comment on "Learn about the USS Quincy ship on Nov. 19"