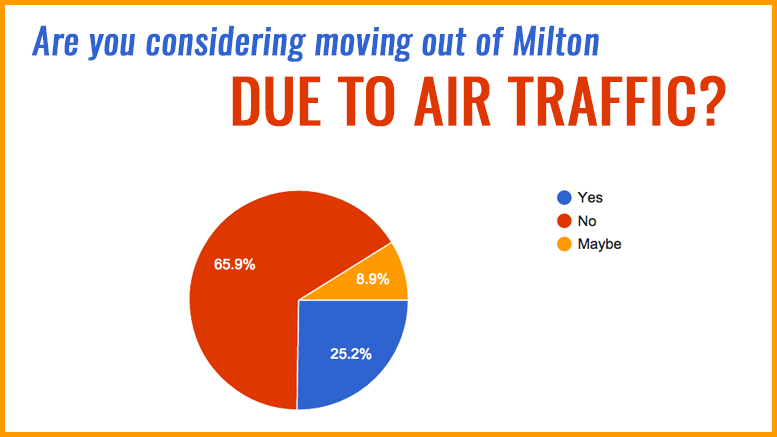 In an October 2015 poll, 75% of respondents indicated that they are concerned about air traffic problems (health issues and noise) affecting their property values. There have been rumors of Milton residents considering leaving town as a result. In February 2016, the Milton Scene polled Milton Neighbors about their thoughts on moving out of Milton due to air traffic noise, pollution, and other concerns. 305 people responded to the poll.

Out of 305 respondents, 25% indicated they are considering leaving Milton, while 66% said they are not. 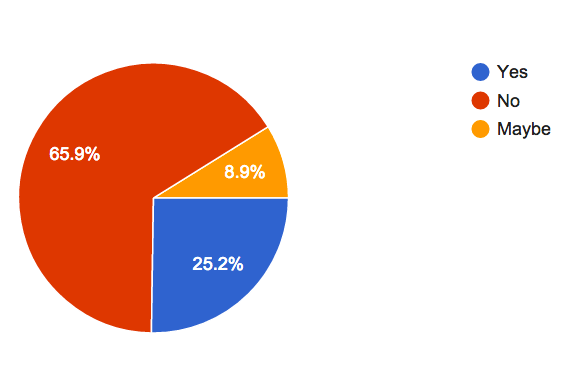 “I had to go back on asthma meds since moving to Milton. I’m concerned it is because of the thousands of arrivals so close to our home.”

“The constant noise is nerve wracking.”

“We are torn between moving somewhere in Milton that has ‘less’ planes or moving out of town. The loss is sleep, property use, near constant noise, black, oily residue on everything (window sills, patio furniture) and many questionable illnesses occurring can’t be ignored any longer. Milton’s Board of Selectmen are not protecting us and their adversity to litigate is highly negligent especially when they know the endless health research that plane exhaust and noise shows harm. Thousands of resident’s well being is at stake.”

“Besides the noise, I am afraid that all the other potential health issues will begin to become evident.”

“I hate living here now due to all the airplane traffic. I used to live on a quiet dead end street, but no more. I work in Milton too so I suffer from the airplanes all day long and well into the evening. I no longer like to open my windows, I won’t have an outdoor garden again and have permanently postponed building a deck/patio. The response from the town of Milton is terrible. Not enough is being done. We must take the FAA to court! ps. Even hiking in the Blue Hills is bad, last time I did so I encountered constant plane traffic! This is a very tragic and sad situation. The air and noise pollution from thousands of planes is sickening people, plants, birds, our entire environment. I’m afraid to continue living here.”

“Not due to air traffic. Possibly will be forced to leave due to the insane increases in property taxes and a potential override.”

Question 2: If you answered YES or MAYBE, how long have you been a Milton resident? 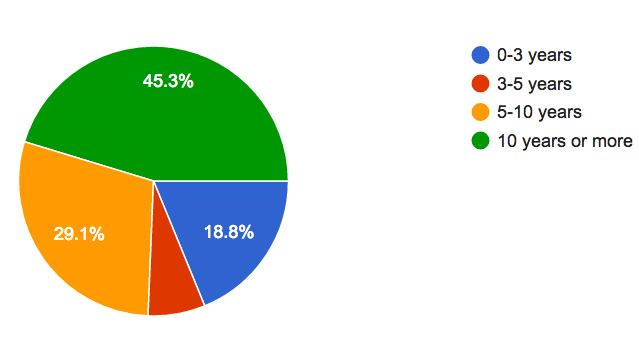 Milton Neighbors had lots of comments regarding air traffic:

“The air traffic has always been like this. I do not mind or notice it. Over time you become habituated to the noise and don’t notice it anymore.”

“I am concerned about the long term health effects from the constant noise torture exposure and air pollution landing on my home.”

“Not only increased air traffic the expansion of the business district and housing at Central have made a huge difference in the noise and congestion in the area. It appears this will only increase if the Hendries project ever gets going. Parts of Milton have become the 4th and 5th lanes of the expressway . I feel badly for the residents of Granite Ave who must wait in line to get out of their driveways!”

“I have lived here 24 years. I lost my college roommate on 9/11. I find the airplane traffic to be comforting.”

“From my perspective, there are far worse things about Milton than the air traffic. Including but not limited to: the town politics (God forbid someone wants to introduce a new business that might serve us residents), the shenanigans in the public schools (as well as the CONSTANT lice infestation – none of my colleagues who live in other towns have such a problem), the disrepair of many or even most of the streets, the East Milton square project fiasco, I could go on… The planes are the least of the things that bother me about Milton. This survey is likely to give you biased data due to a highly biased sample as those most bothered by plane noise will respond while those unaffected will not, please consider this when you promote the results. It’s like saying that everyone in Milton is opposed to the ice house project because a vocal minority got to express their negative opinions first.”

“I think this is an overblown issue. Can see planes landing all day long. Noise is not an issue.”

“I was raised in Milton and many members of my family still reside there. I might one day move there but I can say that Milton is not nearly as well kept and maintained by Town or home owners as it once was. Add to it this frustration with flight volume hat could contribute to a decision to buy elsewhere.”

“Answered no and have been a Milton resident since 1981. Traffic has gotten worse, but it’s not the biggest issue facing Milton. Local politicians should still be doing more to organize Milton’s response.”

“I have noticed a drastic increase in low-flying aircraft. Last night they were flying overhead every 20 seconds! Massport is ambivalent at best

Would be good to ask how directly impacted are people who are considering moving. I’ve been in milton since 1981, and in the same house since 1989 and planes have increased, but some of the comments you hear about lost sleep, rattling Windows, shaking houses, and dirty Windows sound over blown. I’m more concerned about traffic generally and the health risk (pollution) and risk (accidents) created by traffic in our town.”

“As soon as my kids are out of school.”

“I am NOT concerned about air traffic noise. Really a minor issue when there are so many larger problems that affect far more people. We all fly on planes and benefit from living near the airport and city. If you don’t like it, you probably should live farther away. I’ve lived in Milton 24 years and raised my family here.”

“I’m considered about the fairness and safety of air traffic but it would absolutely never be a primary reason for me to relocate my family.

“The cut through traffic is a bigger problem.”

“I never seem to hear the planes and I live in E. Milton!”

“Some people find the proximity to Logan a draw. I can get to the airport in 13 minutes.”

“I left South Boston due to Air Plane noise, raising cancer and auto immune cases in South Boston. Now I fear for the same here! Also the terrible traffic in almost all parts of Milton with the non-enforcement of traffic laws has made living here dangerous with children and unpleasant. I don’t feel safe going for a run or walking with my kids in my neighborhood.”

“It’s a complete non-issue for me. I don’t think I’ve ever heard the planes. I have heard buses on Central Ave but not planes.”

“I live in the house I grew up in with my husband and children. It’s so upsetting and frustrating the amount of planes that fly over my house some days. We are considering putting a pool in our backyard but very concerned about the plane situation. We always had planes over our house, but they were not as frequent or as low..when we have planes over our roof every 3-5 min. ,sometimes it’s every 90 seconds I definitely have thoughts of moving for peace and quiet!”

“Too loud. Too low. Town is impotent.”

Boston University School of Public Health (BUSPH) graduate students are conducting a study of outside ultrafine particle pollution from low-flying airplane traffic over our town.  This small pilot study includes measuring pollution at several locations in town during the last half of March and presenting a report of the findings in early May.  Milton’s Board of Health and the town’s Airplane Noise Advisory Committee are helping the students plan and design the study.

The students need measurement locations under and around the arrival path to Runway 4R which overflies most of the eastern side of Milton.

Poll: Do you own or work for a small business? Poll

Why am I hearing planes when I didn’t before?

Be the first to comment on "Poll Results: Are Milton Neighbors considering a move due to air traffic?"