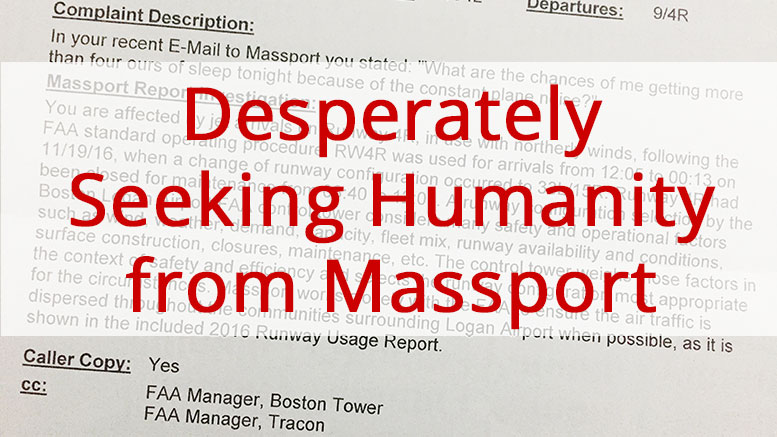 I live under one of the FAA’s new satellite-based RNAV paths, also known as NEXTGEN? What’s NEXTGEN? Well, basically, in an effort to save airlines money (they need it! those extra baggage fees just aren’t enough to cover that fourth home in the Hamptons!), Massport, Boston Logan Airport, and the Federal Aviation Administration have okayed a system that concentrates approximately 60,000 planes per year in a path that goes right over my house.

A group of concerned citizens and I have attended Massport board meetings to explain our plight and to ask for a fair distribution of airline traffic over our and other towns surrounding Logan. We were told to work it out with to the Massport Community Advisory Committee. We went there.

Guess what? They told us to go to Massport. PROBABLY because this would be asking other towns to voluntarily take on the behemoth that is air traffic over Milton. WHY would they want to do that?

You, Massport, have set us up with a system that is doomed to fail, while claiming, falsely, that we have avenues for change.

Anyway, Massport also tells citizens like me to log our complaints into a system. It’s sortof like writing to Santa Claus, except he only writes back canned letters and he leaves noxious pollutants and ultrafine particles in my stocking.

So, guess what, Massport? I’m going to write the letter for you since you seem to have lost your humanity. I have a pile of your letters, so I already know your typical response.

This is what a response letter from Massport SHOULD look like:

We at Massport apologize for flying planes constantly over your home. We realize that it must really get to you, hearing planes every 60-90 seconds, roaring over your home, for days and days on end, sometimes allowing you to only get a four hour break when you can sleep. We feel badly that you’ve had to take your young children out of state during a school week so that they could catch up on their sleep.

Although we don’t live under a similar path, we understand that after going through this for the past couple of years, it could start to really bother you, to the point where it feels like torture. Thank you for letting us know.

Because of your and the complaints of hundreds of residents surrounding Boston Logan, we have developed a method of more fairly dispersing air traffic over all communities around Logan airport (Don’t worry! We are now even flying an equal amount of planes over Brookline, Newton, and Braintree, where we previously didn’t dare).

We realize that just because we can’t relate, we shouldn’t invalidate what you’re going through.

We aren’t torturers by nature. We are good people and we don’t like to see people suffer. And because we are really smart, we were able to come up with a reasonable method of mitigating air traffic, much like it was before NEXTGEN.

Sincerely,
The decent and concerned humans who run Massport 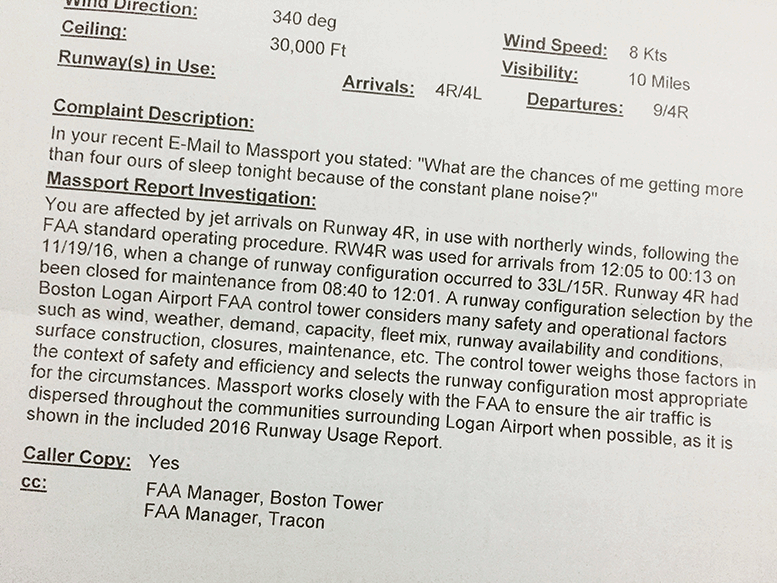 Author’s note: prior to 2014, I used to receive an expected amount of planes over my home, given my proximity to Logan. Now, it’s incessant, almost unbearable. Let’s be clear. I’m not asking for no planes. Nobody in Milton is asking for this. I am asking for planes to be flown over the water as much as possible (there’s a lot of it) and distributed fairly among all towns, including Milton.