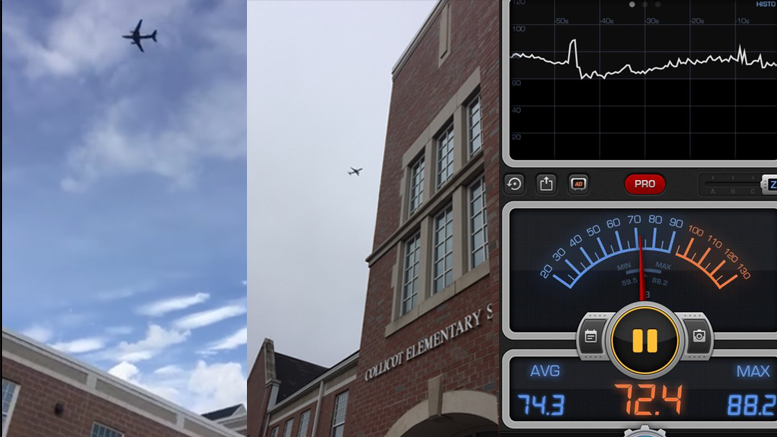 Collicot and Cunningham schools get 40% of all arrivals into Logan overhead.

“I hear daily from families in Milton, Hull, South Boston, and other communities in the 8th District about the impact of concentrated and relentless airplane noise.” – Lynch

“I hear daily from families in Milton, Hull, South Boston, and other communities in the 8th District about the impact of concentrated and relentless airplane noise. As the House considers the reauthorization of the FAA, it is critically important that strong provisions are included to address constituent concerns about the public health, noise, and environmental impacts of the NextGen precision-based navigation procedures. Unfortunately, in our area, the FAA has proven to be the least responsive agency in the federal government. These proposed amendments will help increase community engagement, explore alternate flight paths, and ensure that the public health impacts of airplane noise are taken into account in FAA decision-making going forward. I thank State Senator Walter Timilty, State Representative Nick Collins, our local elected officials, and local advocacy groups for keeping the pressure on the FAA to ensure that community concerns are heard loud and clear,” said Congressman Lynch.

While Republicans included a watered-down version of Congressman Lynch’s legislation, H.R. 598, the Airplane Impacts Mitigation Act in the FAA Reauthorization, they removed critical provisions that would require the FAA to initiate a health study surveying the public health impacts at airports around the country. They also extended the timeline for the study, delaying answers for local communities. In order to increase accountability and get much-needed data on the impacts of airplane noise on local communities, Congressman Lynch offered an amendment to insert the full text of the Airplane Impacts Mitigation Act into the FAA Reauthorization bill.

In addition, Congressman Lynch offered amendments to improve the responsiveness of Regional FAA Administrators. In order to eliminate the prolonged dispute about the FAA participating in a public forum, similar to what occurred ahead of Congressman Lynch’s December 2015 forum with the FAA, he offered an amendment that requires the Regional FAA Administrator to conduct public forums within affected local communities in their region every 90 days to address concerns regarding the logistical, environmental, and health impacts of aircraft overflight noise. Congressman Lynch also filed an amendment, which would establish a Regional Aircraft Noise Ombudsman in each FAA region to enhance agency responsiveness to public concerns with aircraft noise.

To participate in Milton’s efforts for fair air traffic distribution:

Be the first to comment on "Rep. Lynch files amendments to FAA Reauthorization to reduce airplane pollution and noise"