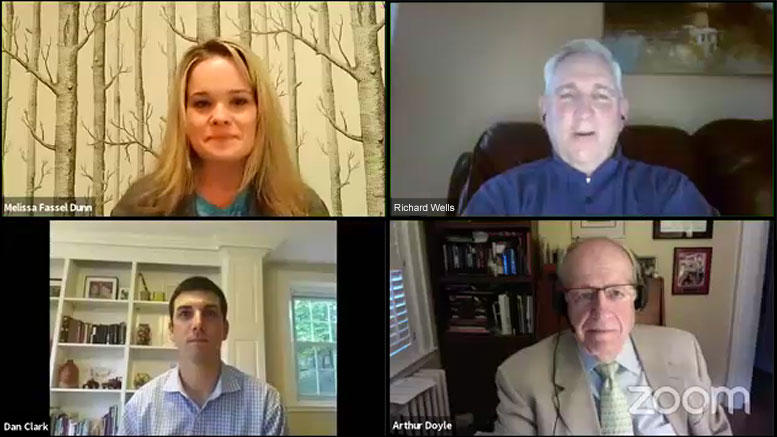 As with other aspects of life during the COVID-19 crisis, Milton politics also adapted with the three candidates for the two Select Board seats up for grabs in the June 9th election participating in an online candidate forum last week.

This forum was moderated by Milton Scene Owner and Founder, Melissa Fassel Dunn and featured candidates for the Select Board contested race. Questions were sought from Town of Milton residents in advance of the forum, and Milton Access TV streamed the forum live on channel 8. The event was also streamed live in the Milton Neighbors Facebook group.

Select Board Candidates include:

The hour and a half event saw each of the three candidates, incumbent Richard Wells, Daniel Clark and Arthur Doyle, make his case for election and provide responses to questions (many of which were submitted by residents), with the impact of the COVID-19 crisis and multiple 40B proposals featuring prominently.

When asked about the Town’s PILOT program (payment in lieu of taxes), which is modeled on Boston’s effort to secure payments from nonprofits that are otherwise exempt from local taxes, both Doyle and Wells pointed out the challenges nonprofits are facing and stressed the need for a non-long-term collaborative approach. Clark highlighted the benefits that the community derives from the largest nonprofits including Milton Academy, Curry College and BID-Milton Hospital.

The candidates were asked about expanding Town of Milton sources of revenue to include taxes and fees derived from marijuana cultivation on large farm land plots, given the likely need for a new school, a new fire station, with budgets complicated by the additional stressor of the COVID-19 pandemic. Wells cited the resilience of the Town and past crises and the need to capitalize on all opportunities offered by state and local governments for assistance, lauding the efforts of Town employees through the current situation. He expressed his opposition to the expansion of any marijuana cultivation. Similarly, Doyle indicated the need for the Town to secure all outside available funding, and the fact that the Town does have a contingency fund as well. He, like Wells, urged caution with cannabis cultivation. Clark underscored the need to address fiscal responsibility in the near and short term while maintaining services. He was open to reviewing additional areas to grow revenue including cannabis.

Each of the three candidates stated their opposition to the 40B proposals by an affiliate of Tamposi Brothers Development for 582 Blue Hill Avenue and 648 Canton Avenue. Wells and Doyle expressed hope that an accommodation could be had with the developer of the Ice House and pointed to positive signs in that direction.

With respect to the Residences at East Milton Square, the multi-story, 111 unit building proposed for a 1.1 acre site in East Milton Square jointly proposed by the Falconi Companies and the Corcoran Company,  Arthur Doyle stated “…it would be nice if there could be a meeting of the minds. Numbers of people, including myself and Richard, have tried to make that possible. It may now be something that could be worked out maybe with a 40R instead of a 40B resolution.”

40R is an affordable housing development option that requires agreement between the community and the developer that comes with state incentives. 40B developments can be forced on a community by developers, in certain circumstances.

Richard Wells cited his work on the issue for the Select Board, commented that he believed that the East Milton project is too big as proposed and went on state “I’m concerned about the immediate abutters on Basset and Franklin Streets, the water issues, the issues that have come up, traffic. These are all things that we need to address going forward for that project.” Additionally, he said he was hopeful that the developers would revise the proposal in light of the feedback that they had received.

Clark stated that the East Milton proposal did not take into account the context of the neighborhood and pointed out the need for a proactive affordable development plan by the Town.

The discussion also reveled a surprising relationship between Select Board candidate Arthur Doyle and real estate developer, Robert Falconi, of Falconi Properties, a co-developer of the Residence at East Milton, a 111 unit structure proposed under Chapter 40B, the state’s affordable housing law.

In response to a question regarding any personal or business relationships with any of the 40B developers in Town, Arthur Doyle stated “I do know Bob Falconi. I met Bob when I taught him my first year of graduate school at St. Sebastian’s School. He was one of my students and a very good student and an excellent hockey player. I had the opportunity to coach that team once when the hockey coach was away for a period of time.” After recounting the pair’s re-acquaintance during the construction of Novara, Doyle went on to state “knowing Bob, whether legally necessary to recuse oneself or not, there is a perception and perception can be reality. And I think if there were conflict, I could recuse myself. And I don’t think the Falconi Company… family would have any difficulty with that. But I would want to be legally sound ground. I would want to be professional and ethical in the eyes of the community.”

Richard Wells and Daniel Clark described interactions with Mr. Falconi as part of their duties for the Town as police chief and as member of the Fire Station Committee, respectively.

Each candidate was asked how he would bring the Milton community together with respect to the airplane pollution and noise issues. Dan Clark stressed that the Town needs to work with other affected communities and described a balance between being close to the airport and the bearing of the noise and pollution burden. Wells noted the dramatic decrease in an airplane traffic as a result of the COVID-19 crisis and hoped that the attendant tranquility would encourage action. He noted the efforts of the Select Board in working with congressional and state representatives and those of the Town’s Massport Community Advisory Committee representative, Tom Dougherty. Additionally, Doyle noted the decrease in air traffic and hoped that it would present an opportunity for policy makers to do something different on the issue.

When asked about what could be done to alleviate traffic in Town and make it safer for seniors and young families, Richard Wells stated that he hoped that the increase in telecommuting would continue and would be something to look at give him the generic reduction in traffic as a result of the emergency. Doyle urged long-range planning in light of the reduction and the opportunity that it has brought. Clark discussed linking traffic to development issues where people do not have to travel so far if they can work and buy the things they want in the community.

In closing, Dan Clark emphasized his experience working with the town administrator on the Select Board and others concerning the Fire Station Committee as well as his energy for tackling the job. Arthur Doyle discussed his long-time Milton roots and the positive experiences of his family in Town. Wells highlighted his experience as a member of the Select Board and a police officer in Milton for nearly 33 years, nine of them as Chief of Police. He then encouraged residents to take efforts on behalf of the community during the crisis, including giving blood and donating to local food banks.

There are two open seats for these three candidates.

Many thanks to sponsors of the forum, including Rep. Bill Driscoll and Elliott Physical Therapy and to Milton Access TV for their technical expertise and for streaming the event live on MATV.

Missed the forum? Watch the replay:

During the month of May, the Milton Public Library continues to offer fun virtual programming for adults and families

Be the first to comment on "Select Board candidates discuss budget, 40B development, impacts of COVID-19, at Milton Scene online Candidate Forum"